You are here: Home / Games / Review: The Game of Life 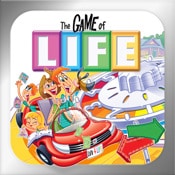 I’ve never met anyone who doesn’t love Life, the classic Milton Bradley board game. It ranks alongside Monopoly, Clue, Catan, and Scrabble as one of the most popular board games of all time.

You might expect EA Mobile to skimp on features for the iPhone version of the game, but instead, every feature of the board game is present and accounted for. Just like in the original, you’ll drive a pink or blue car along the blocked-out spaces, going to college, choosing a career, getting married, having children, buying a house, and so on all the way up to your eventual retirement as (hopefully) a millionaire.

The Game of Life app transforms Life’s familiar board into a cute 3D world, complete with cartoonish characters for you to play as and against. Your car is a real vehicle that’s driven through this 3D environment, and you’ll see blue and pink passengers added as you get married and have children. The game spaces are represented as scenic pit stops along your drive, though color-coded blocks will warn you when you’re about to hit a payday or aÂ mandatoryÂ stop. Great care was taken in reproducing the physics of Life’s famous spinning wheel. Everybody in the world knows how that wheel is supposed to behave when you spin it, andÂ The Game of Life recreates its loose, easy to spin mechanics perfectly. This is one of the game’s best aspects, as you can’t help the nostalgia that spinning that wheel evokes.

Unfortunately, the fun pretty much ends there. The fact that the gameplay is fluid and bug-free doesn’t make it a worthwhile experience.

Let’s start with your computer-controlled opponent player(s). As with most you-against-the-computer games, The Game of Life‘s A.I. often feels horribly unbalanced. We human players have an irrational tendency to assume that an A.I. opponent is given an unfair advantage by a game’s underlying software, but this app forced me to wonder if that frustration really was irrational. I played through several games, and every time, my wheel-spins always managed to land on low numbers (usually 1 – 4), while the A.I. repeatedly spun 8s, 9s, and 10s. It was uncanny how this happened on every single spin, in all the games I played. I want to believe that this was just irregularly bad luck on my part, but I can’t help wondering… But my real problem with The Game of Life is, I think, something intrinsic in its design. Everything you love about the board game is here in this portable version, only most of it is automated. And that’s the problem: there’s just not that much for players to do. Whether you’re playing alone or against a friend,Â The Game of Life all but plays itself.

Life has always been about the random things that happen to adults between the start of adulthood and retirement, and most of that is entirely out of the player’s control. Winning and losing are largely left to chance. But at least when you’re playing the board game, there’s the illusion of having involvement in Life’s randomness, since there’s money to keep track of, your game piece to move around the board, and various other actions that require you to, you know, do stuff. With all of that “stuff” completely automated, it takes the human involvement out of the formula, and leaves you with a handful of minor decisions to make along the way. Your biggest contribution is spinning that wheel.

If that’s enough for you, then you should be thrilled with The Game of Life. If you’re hoping for a game that requires you to actually engage with it, look elsewhere.