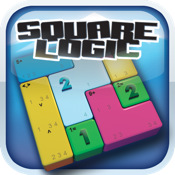 Sort of a deductive reasoning game based around numbers, Everyday Genius’ Square Logic could be Sudoku’s more creative and colorful sibling.

Much like in Sudoku, you’re presented with a grid, which must be filled in with numbers, and there can only be one of each number in every row and column. The similarities end there, however, as you’ll use every sort of math to determine which numbers go where. Squares are grouped together in “cages,” and every square contains a numeric hint that gives you a mathematical function to work out, in order to solve the puzzle. Most puzzles start off with a few freebies, where it tells you what the number is for a few of the squares. These are represented with a number an an equals mark. From there, the earliest levels start you off easy, with simple addition puzzles; two squares side by side marked with a “3+” hint, for example, might consist of a 2 in one square and a 1 in the other. But figuring out which is which is where the deduction comes in. Using similar math problems in the vertical columns, it becomes a matter of logic. Everything will fit in its place, and there’s only one way to solve each puzzle.

Every level consists of twelve puzzles and a final, “Challenge” puzzle, which is the hardest of the bunch. With each new level, you’re introduced to new twists in the game formula. Subtraction, multiplication, and division are added early on, and then it gets really interesting. Some blocks might be labeled “Even” or “Odd,” which means exactly what you think it does. There are groups of blocks marked “Straight,” which means that like in card games, the blocks in that cage will be sequential numbers like 1, 2, and 3 — but they won’t necessarily appear in sequential order. Another set of blocks will be linked with greater-than and less-than symbols, which again means just what you think — and some of these cages can be very big. One clever twist later in the game presents dual puzzle boards on a single screen, where the answers for both match perfectly, yet the hints and math problems are different. Square Logic handicaps things a bit by putting available numbers in the bottom of every block, and as you fill in adjacent blocks, the used numbers are removed from the available list in the other blocks. It’s a very useful feature — the game would be unplayable without it — but it in no way simplifies things. With every subsequent level presenting new challenges, it’s impossible to get bored. Wisely, the game was designed so that when one puzzle’s finished, the next appears immediately. This keeps the momentum going — an essential feature for a puzzle game that never uses a timer.

It’s just one of many thoughtful little tweaks that make the game incredibly addictive. If you ever get stuck, there’s always a hint available that doesn’t affect your score. Every selection you make on the puzzle board is counted towards a running tally, and the lower your tally, the better your end score. Every level comes with a “par” number, which is a minimum goal for you to try to meet. The game’s one and only problem is an annoying issue that arises when you’re making your number selection inside the squares. Any tap you make in one of those squares counts as a step — even if you don’t select a number. So if you accidentally tap a square you don’t mean to, or if the number you touch doesn’t become selected, a step is still counted against you. In addition, at times the game doesn’t register your number selections at all; you have to really press on the number you want, as a quick tap won’t always do it. Forget this simple rule, and you’re screwed.

If not for that little interface quirk, Square Logic would get a perfect score from me. But don’t let that keep you from buying it; it’s easily one of the most addictive iPad games I’ve ever played.