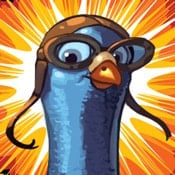 Pigeon Squadron is a “bombing run” game with some distinctive twists. While the mechanics of the game may seem familiar — flying over targets and dropping bombs on them — Pigeon Squadron turns the genre on its head by making you a pigeon on a comedic mission to drop poop on unsuspecting city pedestrians. That’s right, “bombs away” in this case, refers to bird poop. Across 45 levels, you’re sent out on runs through four large cities, World War II style, to whitewash enemies of the pigeon cause. The control scheme puts the iPhone’s accelerometer to very good use, as you tilt your device to steer or adjust your flying speed. All missions are timed, and feature a variety of targets to hit. Sometimes you’re out to bomb as many targets as possible. Other missions send you on raids against very specific victims, such as people, pets, or vehicles. Medals are awarded after each level, and you must score at least a bronze in order to advance. This can get particularly tricky in later missions, when your streetside victims start fighting back by angrily lobbing hats, canes, and whatever else they happen to be carrying into your flight path. Fine operation of those tilt controls is required here to swerve and dodge the enemy obstacles, or otherwise they’ll add up fast and take you out.Â Occasionally, “good” obstacles are thrown into the air, such as food, which your pigeon can consume to restore its health. A button in the bottom right corner controls your “bomb” drops, but there’s always a brief power-up time after each glob of poo falls. So no wild strafing runs, though there are bonus powers available at times that allow you to summon reinforcements to pepper the immediate landscape. You can also choose to bomb things that aren’t your specified targets, for extra points, but you risk losing time if you’re still powering back up when you reach a real target. On-screen arrows point you towards your targets during each mission, and this was the one area I found lacking. The arrows work just fine at guiding you to your targets. But often there are numerous arrows and targets to aim for, and these targets were usually quite far apart from one another. There were multiple instances when I would pick an arrow at random and follow it to my target, but that target wound up being very far away. This eats up significant time on the countdown clock, yet if you had some indication of each target’s proximity, you could pick a closer one and save time. A tiny map in the top right corner shows the entire city and your current position; it would have been super helpful if targets were designated on this map as well, to give the player some idea of which ones they’re closest to. Instead, you’re forced to fly blind, never knowing how far away a target is that you’re chasing down. This is particularly frustrating when a target turns out to be a moving vehicle that drives right off the map before you can reach it. The cartoony graphics are cute, and the cheeky dialogue enhances what little characterization there is. But the aspect of the game I was most impressed with was the fine control that the tilt sensor allowed for. I’m still not sure why Apple felt the need to add a gyroscope to enhance the iPhone and iPad’s tilt sensors, when the tilt controls were already this finely tuned without it. The device I played the game on doesn’t have a gyroscope, and didn’t need it. Pigeon Squadron has a good balance between “never too easy” and “hard enough to be challenging.” Some levels are more difficult than others, but I never felt like I was being presented with an insurmountable test. It’s good, sometimes silly fun, at a price that can’t be beat.