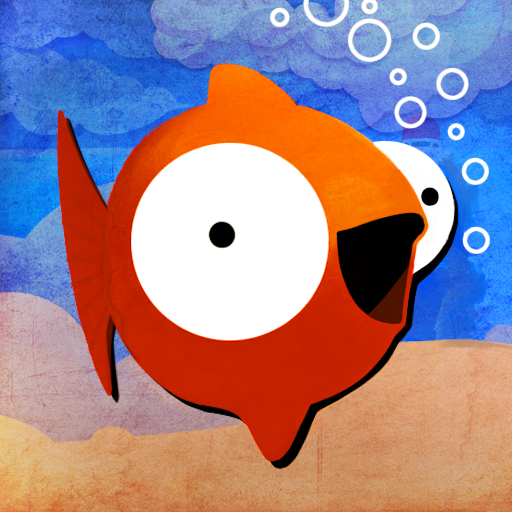 Just arriving in the App Store today is the latest title from Launching Pad Games, an iPhone game called Mighty Fin. Mighty Fin is an ocean-based side-scroller that has you directing a small, orange fish on his “Round the World Tour” vacation.

Fin, it seems, bought his vacation package from “Shady Sal,” a less-than-reputable dealer whose vacation hotspots turn out to be very hazardous locations to a small fish’s health. Everything from spiky rocks to bigger wildlife stands between Fin and his good time, and he needs your help to make it through the game’s eight levels. Along the way, he’ll also encounter all manner of beneficial items to collect and points to rack up. What makes Mighty Fin unique is its unusual control scheme. Fin’s a rather buoyant little guy who bobs along in the water, but needs help knowing when to dive or leap out of the water. With obstacles to duck and targets to acquire, there’s an awful lot of rollercoastering up and down. There’s only one control required: to make Fin dive, you touch the screen. To make him rise, you let go of the screen. Dive him deep and then let go, and he’ll jump way up high, right out of the water. Fin’s a fast swimmer, so the scenery scrolls by quickly, forcing you to make split second decisions about the path he should take, and often there’s more than one right decision. But run into any sort of dangerous obstacle and the level’s over instantly. Bubbles equal points, so you must aim for those as much as you can.Â You learn pretty quick that the game has a sort of rhythm that must be followed in order to win; the touch control is surprisingly refined, so learning the feel of it is key to your success. Aside from bubbles, you’ll also find extras dotting the landscape, such as extra hats/outfits for Fin to wear. These accessories have no impact on gameplay, but they add to the little guy’s personality, and there are quite a lot of them. Collecting them all gives you a small sense of satisfaction. Mighty Fin is Game Center enabled, so there are all the usual leaderboards and whatnot.

The only quibble I have with the game is that there are only 8 short levels to play through, which seems awfully small. It compensates for this by adding a randomizing algorithm that supposedly gives you a different experience each time. My experience with the game was that these differences are very small, seemingly rotating between just two or three variations. Still, at least it’s something, and after you make your way through a level the first time, it’s unlocked so that you can play it again to your heart’s content, along with an “endless” mode that goes on for as long as you can survive it. One last thing: I was surprised to notice that playing this iPhone game at 2x size on my iPad still looked remarkably good. I’ve never seen “retina display” graphics that didn’t become jagged when magnified on the iPad’s screen — until now.

Mighty Fin is a solid value for its bargain price. Don’t let its simplistic controls fool you; it’s not an easy game to master, and should prove plenty challenging for any kind of gamer.