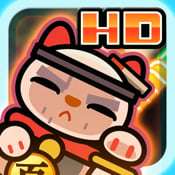 Only a Japanese video game could offer you the chance to play as a cup of noodles, a hamster in a ball, a zombie, a lantern, a magazine, a squid, or a rice ball. Except this “Japanese” game was made by a bunch of Brits.

Meow Meow Happy Fight HD pits you as one of 20 colorful characters who are forced to duke it out in the streets of Tokyo against one another. The “why” is a typically nonsensical story about a cat from the future named Happy Cat who travels backward in time to contaminate the timeline because the future is “too happy” for his taste. Somehow — I still have no idea why — this results in the aforementioned battle royales throughout the colorful sights of Tokyo. The gameplay consists of this sort of weird, top-down deathmatch between you and several of the game’s AI (there’s no multiplayer), where the goal isn’t so much to kill as to win. Using two virtual sticks — left to move, right to aim — you do your best to shoot-and-kill your various enemies, taking advantage of power-ups like explosive barrels to help do the job. Killed players — including you — are soon returned to the board sans power-ups, to keep going. When another player dies, their power-ups are left behind for other characters to pick up. This cycle continues until the timer clock reaches zero, and the player with the most points wins the round. Place first in any level and you unlock the next, for a total of 30 levels. Even though these levels are somewhat diverse, and the game boasts some really fantastic production values — Tokyo’s neon streets have never looked so vividly adorable — the gameplay itself is the equivalent of a one-note joke. There’s no variety amid the game mechanics, despite the wealth of colorful characters, environments, and power-ups. You spend all of your time strafing around enemies, trying to stay out of their line of fire while hitting them with your own guns. There’s an eentsy bit of strategy involved; you can try to position one of your enemies between you and another enemy, so they take the bulk of the hits, for example, or you can shoot at explosive barrels when enemies get close to them. And the AI is smart enough to try and pull these same tricks on you.Â But Happy Fight still winds up being a monotonous experience.

Its humorous tone is the best part of the game, butÂ I can’t decide if Meow Meow Happy Fight HD isÂ celebrating the absurd side of anime/Tokyo culture or lampooning it. Either way, it’s a game that gets everything right — everything but the gameplay.