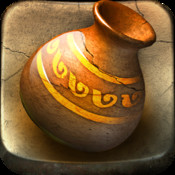 From molding and casting to painting and selling, Let’s Create Pottery takes you through every step that professional potters use to create art. The process is streamlined, of course, but the app definitely gives you a good sense of what it’s like to work with clay.

The crux of the game is the app’s first stage, where you start with a small lump of clay and spin & mold it. There’s an in-app Inbox that’s part of the game, where you are sent ordersÂ from customers around the worldÂ of increasing difficulty. Each order includes a photo of the kind of piece the customer wants, and your job is to mold and paint your work to resemble the photo as closely as you can. The pottery wheel spins on its own; your job is to massage it into shape. Slide your finger along it upwards, and it gets taller. Push in, and it contracts. Pull out and it expands. Pottery is an art of subtlety, and the app smartly conveys the sense of delicacy and finesse required to work a lifeless piece of clay into something beautiful. It can be a painstaking process, which might frustrate some iOS players, but I appreciated the realism. Ultimately this part of the app is basically about matching shapes, but there are stars beneath the photo that indicate how you’re doing at achieving the right shape (and paint job). The stars track your progress as-it-happens, so as you mold your clay, you’ll see more stars added when you get closer to the desired piece. The stars disappear when you’re getting it wrong. Once you’re happy with your creation, you send it directly to firing, where you watch it sit in a furnace for an abbreviated hardening session. After a few seconds, your piece is good and hard, and you can take it out and view it. Spin it to appreciate it from all angles. The imperfections and micro-cracks on the surface are nicely done and realistic in appearance. From here, you select colors, paint brushes, or other decorations to add to the piece, and again, you’re given a star meter to show how close you are to getting it right. When you’re satisfied with your finished work of art, you can sell it at auction. A simulated auction screen lets you watch the dollar amount grow as your work fetches a particular sum. That amount is then added to your available funds, which you can spend at the in-app “store” (it’s not a real store; no real-world money required) to acquire new materials and paint colors and whatnot for future pieces. If your work is a customer order, instead of auction you can choose to simply fulfill the order. If the customer likes what they receive, you’ll get a nice little payment via your Inbox. The game portion continues to progress this way with ever-harder pieces for you to create, essentially teaching you the basics (and eventually the complexities) of pottery-making while adding enough objectives to make it not feel like a tedious tutorial. It also gives you a bit of a “sandbox” feel in that you’re free to take orders or sell your work at auction. I often found that if I wasn’t pleased with how an order had turned out, I’d sell it at auction instead, and then try again at fulfilling the order.

Beyond the game, Let’s Create Pottery can also be used as a terrific simulator for creating pottery, and its subtleties ensure that no two pieces ever turn out quite the same. iDreams, the app’s developer, has created a thriving fan community where talented potters are constantly posting their latest pieces for others to see, and there are some genuinely amazing pieces there. You’re invited to add your own work to the gallery through a quick tap inside the app. I never experienced any crashes with the app, but I did have one odd issue. Occasionally, as my pottery was spinning or when I was painting my creation, the app would respond about a good centimeter below the spot where I touched the screen. So instead of placing a painted stripe exactly where I wanted it, or shaping the clay in the place where I touched the screen, it would happen below that spot. It appears to be an odd glitch, and as I said, it only happens infrequently.

There are some nifty graphical effects and sound used throughout the game. For example, molding is always done in an outdoor setting, and you’ll hear birds chirping and other sounds of nature while that wheel is turning. Your device’s gyroscope and accelerometer are put to fun use as well, causing the screen’s background to shift whenever you move your device. Hold it up and turn to your left, and the background will react, as if you’re looking through a portal. It’s wholly unnecessary to the app, but undeniably cool.

Your enjoyment of Let’s Create Pottery will entirely depend on how much patience and appreciation you have for the artform. It’s not in any way what most players think of as a traditional “game,” but it is a very rewarding experience for would-be artists. I daresay there are even some things you’ll learn from the app that you could take with you in the real world, should you pursue learning to be a real potter.