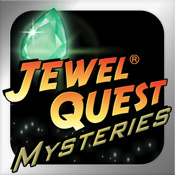 Jewel Quest Mysteries is a twist on the popular match-3 puzzle game, that inserts scavenger screens in between all the matching. The iPhone game is addictive fun, but it’s not without its glitches.

EA’s simple puzzler comes with its own storyline, believe it or not, about a pair of explorers named Rupert and Emma who search through ruins in Egypt; it has twists and turns, but it’s completely peripheral to the game itself. You can follow along by reading the chapters that come between the puzzles if you like, but it adds nothing whatsoever to the game. Most of the game is actually spent working through scavenger hunt screens, most of which are quite lovely. Pinch-to-zoom functionality is very helpful here, and some of the objects are downright evil in how well they’re hidden. As well designed as these screens and hunts are, they’re also the game’s biggest problem area; there seems to be a glitch where tapping on a found object doesn’t register. Repeated attempts will eventually let you get it, but it takes some genuinely precision touching, and even playing in 2x mode on my iPad didn’t help this. The match-3 jewel puzzles are exactly what anyone who’s played Jewel Quest remembers. It’s similar to Bejeweled, but has its own quirks. There are also similar gemstones hidden within every scavenger screen; find them to gain bonuses.

Given its relative simplicity of design, it’s really surprising how much fun it is to play. I found it very difficult to put down, and whisked through the entire game in just a few sittings. It’s also a steal at just $.99. But without a software update or two, Jewel Quest Mysteries is far from perfect.