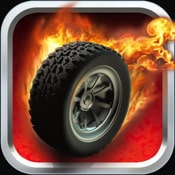 Remedy Entertainment is best known as the creator of the genre-busting, story-driven shootersÂ Max Payne and Alan Wake, but before those characters were born, Remedy published a racing-and-shooting classic that’s largely unknown by today’s gamers. But fifteen years after the release of the original PC game,Â Death Rally is back and better than ever.

There’s a minor attempt at a story at the game’s outset (it even features graphic novel-style imagery, a laÂ Max Payne), but it’sÂ minusculeÂ to the point of irrelevancy. All that matters is that you get to race cars and shoot guns at the same time. It’s every guy’s testosterone-fueled dream come to virtual life. Death Rally pits you in an unending series of illegal street races, where your goal is to not just win, but to destroy as many of your competitors along the way as you can. (Though you don’t have to destroy any to win.) Controls are simple, using those dreaded virtual buttons, yet here their implementation is among the least frustrating I’ve encountered. There’s a virtual thumb stick on one side, and a weapon trigger button on the other. You can reconfigure their placement and even substitute arrows for the thumb stick, as you wish.

The game unfolds in a progressive fashion, yet it’s entirely open-ended, presenting you with a list of available races that you can play through at your own pace and comfort level. You’ll start out with “Beginner” races available, but the more you play, the harder the available races become. There are “open” races that you can play as much as you want, and there are “challenge” races, where the stakes (and rewards) are higher. Races last just a few minutes each, so it’s quick and easy to jump from one to the next.Â You’ll gain access to better and more advanced vehicles as you go along, as well as better weapons and various upgrades. Money is required to purchase these items, and you’ll both find some placed at random along the race routes, as well as win money based on your performance in a race. There are monetary bonuses given for how many cars you destroy along the way, whether or not you defeat each race’s designated “boss” car, bonuses you find on the track, and more.Â For an additional $.99 in-app purchase, you get access to bigger rewards after each race, allowing you to advance and collect better gear faster. Even the way the game qualifies this — with an underground power broker offering you this special deal like a drug dealer in a back room — acknowledges that what you’re buying is essentially a cheat. There’s something kind of appropriate to an “illegal street racing” game about being able to buy black market goods, but it still feels unfair to those who don’t want to spend that dollar. On the other hand, you can max out your resources just fine without the cheat. It just takes a little longer.

What I love most about the game is that it’s not simply an iOS port; it’s a remake completely built from the ground up to take full advantage of the platform’s capabilities. For example, in the “garage,” aka the vehicle selection tab, when you cycle through the available cars, you can swipe to rotate the car, examining it from any angle. It’s just one of several cool little features that Remedy didn’tÂ have to throw in, but that’s how thoughtful they were in building this app. Another nicety is that Remedy is actively producing updates and expansions, introducing new cars, weapons, and race tracks on a regular basis — all free. The graphics are terrific — leaps and bounds above the original PC game — and are even optimized to look especially sweet on an iPad 2, running at 60 frames per second. You can pretty much play any way you want — race honest and true, winning by skill alone, or mow down every opponent in your way, playing as dirty as you like. There are no penalties or consequences for either style, so go at it however you like.

Remedy promises that a multiplayer mode is on the way in another free update, along with plenty more of everything else. It’s hard to imagine a racing game for iPhone or iPad that looks better or is more fun to play than Death Rally. It’s both a loving tribute to a classic game gone by, and a top-tier racing game for today’s players on-the-go. It offers incredible value for its bargain price tag, and it’s not to be missed.