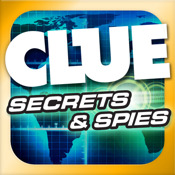 As it turns out, Clue: Secrets & Spies for iPad has nothing to do with the board game Clue. It shares the brand image, and there are some peripheral “secret agent” characters referenced who share their names with the iconic Mrs. White, Mr. Green, and so forth, but you won’t spend your time solving a murder or wandering a large mansion filled with deadly weapons. Instead, Secrets & Spies presents you with the standard scavenger hunt wrapped in an excellent presentation. When you start up the game, it presents you with seven missions, each of which you’re given up to an hour to complete. Each mission is comprised of four standard scavenger hunt screens (several of which are reused in other missions, but with different objects to find), with a list of ten “clue” objects that are unique to that screen. Find the ten clue objects and you succeed. You can take on the four screens in any order you want. The clock starts counting down from one hour when you start the first screen, and it’s up to you to solve the entire mission before time runs out. If you fail, you have to start the entire mission over, though you can pause at any time. You can also get hints, though these must “power up” before each use, and can eat away at your time. After those first four screens in a mission, you have one more screen to do, but this one comes with a twist: the photo is obscured by night or fog, so you have to use night vision goggles, a flashlight, or fog reduction glasses — which you must find in one of the first four screens — to highlight a small, round section of the photo at a time. Sweep your finger across the scavenger screen and the unobscured area follows your finger. These levels are meant to be more challenging than the standard variety, but I found them easier; something about narrowing the field of vision helped me focus and locate the clue objects a lot faster. Following the fifth screen, you’re presented with a bonus level. The game mechanic is completely different in these bonus levels. Instead of finding a list of objects, the game presents you with two identical photos. Your task is to locate the tiny differences — and in some cases, I do mean very tiny — between the two pictures. There are fifteen differences for each bonus level, and they’re not listed for what they are, and this is where the majority of your mission’s hour of allotted time will be used, because these are some mighty fiendish puzzles. The game’s presentation is polished and modern, in a super-spy kind of way, with nice visual touches and effects. The scavenger screens themselves are nice and clear, though the game could have benefited from the option of zooming in; most of the objects are recognizable, but a few were so small I couldn’t see them at all without the help of the hint feature.

The music’s biggest downside is the music — an inane, repetitious elevator music that never varies in any way. Most frustratingly, there’s no option for muting the music without also muting the sound effects. The effects are nice, so I hated to lose them, but I had to mute all the sound just to get rid of that detestable music. So many iOS games — many with lesser production values and no big-name publisher support — offer the option to listen to your own iTunes tracks while you play, but this is a glaring oversight that EA Games apparently couldn’t be bothered with. Get used to this screen, you'll see it A LOT.

Another annoyance is the long load times between scavenger screens. You’d think that a static photograph that doesn’t move and barely changes (when you find an object, it disappears) wouldn’t use up that much of your iPad’s memory, but I was surprised at just how long it took to load a new scavenger hunt. I’ve played games with seemingly more complex graphics that required much shorter load times between levels. I bought Clue: Secrets & Spies from the iTunes App Store just before Christmas, during a fantastic $.99 app sale that EA Games was having, and for that amount of money, it was a terrific value. But if you’re considering buying it at its full price, then you should know what you are — and aren’t — getting. I grabbed it assuming it was built on the deductive reasoning mechanics of the Clue board game, and it’s nothing of the sort. Scavenger hunt games are a dime a dozen on the iPad, so I was surprised to find yet another one built around the Clue brand name.

But you can find far worse games than this perfectly enjoyable time-waster.