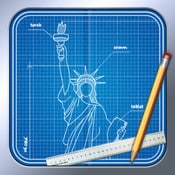 Deceptively simple Blueprint 3D represents an entirely new kind of game: one specifically made for the touchscreen format of the iPad and iPhone, that wouldn’t work on any other kind of device.

The gameplay mechanic behind Blueprint 3D is a little hard to explain verbally, but super easy to understand once you see it in action. The idea behind this puzzler is to form a standard blueprint schematic by manipulating it in 3D space. Turn it, flip it, twist it, anything you can think of. The pieces are stuck in place, but by changing the orientation of the entire blueprint, you can line them up to form a 2D drawing. The clock ticks while you work, so your objective is to put the drawings together as quickly as possible. …and you manipulate the grid until it all lines up, like this.

Nothing but a touchscreen could make a game like this playable (Microsoft’s Kinect might be able to do it, but players would suffer for not being able to physically touch their screens). Personally, I find it terribly exciting when games like this come along, that take full advantage of the iOS platform. It’s available for iPhone, but the iPad version is where it truly belongs, because the level of detail in the line drawings is easier to make out on the larger screen. Do you see it coming together?

The game is split into categorical packs such as architecture, electronics, military, space, and more, with several dozen puzzles in each. Tackling one puzzle after another, the game moves fast once you get the hang of it (hint: look for similar kinds of lines or shapes that go together, and try to line them up). The kind of instant gratification it provides makes it all the more addictive. It’s not hard to find yourself spending an hour or two, playing the game all the way through in a single setting. Thankfully, developer FDG Entertainment promises more packs in the future (I’m hoping for a Christmas pack). It’s also loaded with achievements, which manage to make even the most mundane aspects of the game fun. A finished puzzle from the “Space” pack.

Another area where the game excels is in its construction. It’s the kind of game Steve Jobs would have loved for its attractive, clean design. It’s just phenomenally well made, with enough attention to even the tiniest details to prove that the developer considered this a labor of love. The interface looks like an architect’s drawing desk, while the broken up schematic that you manipulate is smooth and responsive. (You can even alter the speed of its movements in the Settings menu.) The sound effects are great, with a satisfying click for every button and a photo snap when you succeed in setting a blueprint right. It’s a very inviting game environment, and everything just works exactly as it should. I experienced no glitches or crashes in all the time I spent playing. Blueprint 3D never creates too much of a challenge for the player, but there’s something remarkably gratifying about putting those drawings together. Somehow, it never gets old. Thanks to its triumphant design and perfect interface, and its wildly original gameplay, this is one of the very best time-wasters you’ll find in the App Store.