You are here: Home / Games / Pro Soccer Zombie: Apocalypse Edition – This Is How Zombie Games Should Be 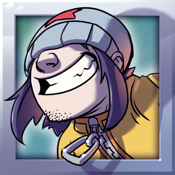 Every once in a while one discovers a new game, which even non-gamers enjoy. In last years zombies and the zombiecalypse have been omni-present and we love to blame Danny Boyle for this but thanks to probably the same Danny Boyle, we now can play Pro Zombie Soccer: Apocalypse Edition. The fun starts immediately upon booting the app, which is promoted by serial mobile game gurus Chillingo, from Angry Birds and Cut The Rope fame. Below pictured boot screen is followed up by the even more awesome home screen of Pro Zombie Soccer: Apocalypse Edition. And while it was nice to find the absolutely awesome Diavlobook font, by Jos Buivenga, the font use itself became a little boring to me after a short time. But that really is the only negative I can find in PZS: AE. Once you have started the game, a hardcore mode can be selected after you finished everything, you are taken through an intro story of amazingly high quality. Comic lovers will immediately feel at home. The first levels in PZS:AE are rather easy and the tutorial guides one through everything, special ‘balls‘ included. The graphics are absolutely gorgeous and everything is to the tune of some kicking beats. As the game evolves, more and more zombies find their way to you, and new twists are added to the game: use of the accelerometer, civilians which should not be killed and humor. Humor arguably not PC for 6-years old kids. For only $1,99 Zombie Pro Soccer is one of those games which are not only fun but come and cover everything: awesome design, good tunes and lots of Zombies to kill.

Pro Zombie Soccer: Apocalypse Edition quickly became a favorite on the iPad and has been so far the best zombie game I played on the iPad. It literally blows all other ZOmbie killers out of the way.