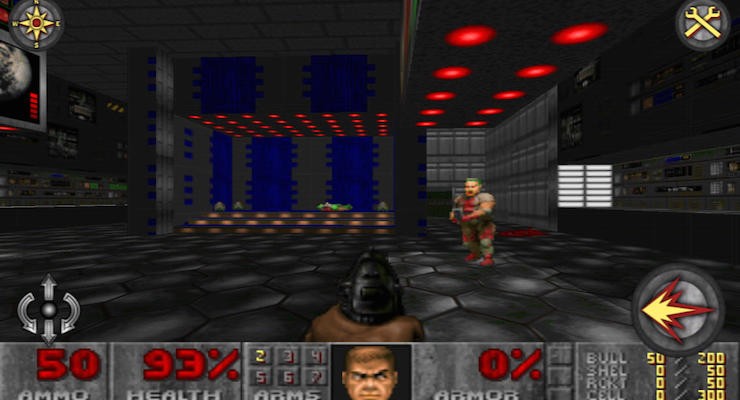 Over the past couple of years the iPhone and iPad have evolved into excellent devices for anyone who enjoys playing games. The App Store is filled with all kinds of fun and entertaining options ranging from fast-paced shooters and mind-bending puzzle games to deep RPG’s and intense simulations. Some of the more popular offerings are actually classic PC games that once helped define a genre or was trend-setting in some way when it was originally released. These great games have often found new life on iOS, bringing their innovative style, unique game play, and groundbreaking settings to a completely new audience. Here are six such games that you can download and play right now.

The grand-daddy of all first-person shooters, Doom has been ported to more platforms than any other game in history. Originally released for PC back in 1993, this game had an incredible impact on the entire game industry. Its lightning-fast action, pseudo-3D  graphics, and dark setting remain intact on the iPhone and iPad, creating an amazing sense of nostalgia for those of us who are old enough to remember playing it back when it was fresh and new. Sure, there are better looking first-person shooters on the App Store, but very few have the legacy and impact of Doom. And for the record, the dreaded Cyberdemon remains the stuff of nightmares even years later. When it was first released back in September of 1993, Myst enthralled its audience with amazing graphics, incredibly challenging puzzles, and a deep, overarching mystery. Millions of players spent hours exploring the mysterious island in which the game was set, searching for clues that would help them unlock new areas. The game’s simple touch interface works great on iOS, making this a very faithful translation of the original. And if you enjoyed this game back in the day, its sequel – Riven – is available on the App Store too. One of the best adventure games of all time recently made its debut on the iPhone and iPad in the form of Grim Fandango Remastered. All of the original sounds and artwork from this masterpiece have been updated for Apple’s devices, and Metal api’s have been used to enhance performance across the board. The result is a slick version of an already fantastic game, complete with touch controls and new content added to the mix. If you missed this one when it first came out back in 1998, now is your chance to play a true classic on your mobile device. 1995’s Terminal Velocity was lauded at the time for its amazing 3D graphics and intense action. But this arcade-style combat flight simulator still holds up very well today too, delivering smooth gameplay at 60 fps on both the iPhone and iPad. The developers improved the game be eliminating the fog that once clouded the player’s vision, and even added controller support as well. Can you manage to stave off an alien invasion using an experimental fighter craft that has barely been tested? Download Terminal Velocity and find out. The original version of Sid Meier’s Pirates dates back all the way to 1987, and was precursor to the open world games that we take for granted today.  Players take the role of a pirate in the Caribbean during various eras spanning the 16th, 17th, and 18th century. Starting with an inexperienced crew and a small ship, they set off to find their fortunate on the high seas by making allies with the right people, attacking enemies, and trading goods throughout the region. All the while they are also busy tracking down treasure fleets, notorious pirates, and their missing family. The iOS version offers 27 ships to control new options for sword combat, virtual cannons to fire, a variety of mini-games, and much more. It also has greatly improved graphics and sound, bringing it into the modern era with class and style. Another amazing adventure game, The Secret of Monkey Island is a true classic in every sense of the word. Originally released back in 1990 by LucasArts, the game was a point and click affair that included cartoon-style animated graphics, a great story, and a cast of memorable characters, including Guybrush Threepwood, the hero of the tale. The iOS version of Monkey Island includes updated and remained graphics, better sound, and an intuitive touch interface. But all of the mystery, suspense, and humor of the original have been completely retained.

5 Great New Games for iOS That You Should Download Now