You are here: Home / Feature / The History of Apple and TV 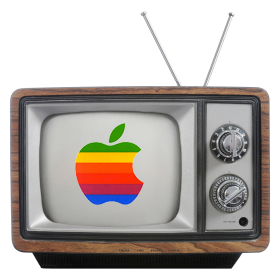 It’s been a long courtship between Apple and television — longer than you may know. The truth is, Apple has pursued TV for almost two decades. Now that their wedding seems to be inevitable, let’s look back at their prior attempts to walk down the (living room) aisle.

Everybody knows that Apple is working on a television it hopes will revolutionize the home entertainment industry. But did you know that this is not Apple’s first attempt to converge its computer products with the boob tube? Here we look back at how Apple has tried to get into the TV business many times before — and uncover some little-known corners of Apple history along the way. Apple’s first attempt to converge their computers with a modern television set can be traced all the way back to 1993, just a few months after CEO John Sculley was forced out by Apple’s board of directors. (He was replaced by Michael Spindler.) So it seems likely that Macintosh TV was developed under Sculley’s watch, though there’s no direct evidence of who exactly came up with the product.

The Macintosh TV was aesthetically similar to the Macintosh LC 500 series desktop computer, but its 14″ screen doubled as a TV screen. It came with a pre-installed TV tuner card, a CD-ROM drive, a remote control the size of a credit card. It was also first Apple product to be available in the color black, and came with a matching black keyboard and mouse.

Mac TV never caught on, and was discontinued just four months after it launched. Approximately 10,000 units were made, any of which now would make for quite the collector’s item.

If Apple’s first pass at TV misfired, its second was a false start altogether. The Apple Interactive Television Box, which could be categorized somewhere between today’s Apple TV and TiVo, was a very forward-thinking idea that simply wasn’t ready for prime time. This set-top box was developed by Apple and several television provider partners all over the world, with the intention of functioning as an interactive TV service, which would have had features akin to the interactive programming guides of most modern cable boxes.

But there were much bigger plans for the service Apple and its partners intended to provide. While there was no hard drive for recording shows, the AITB was able to pause, fast-forward, and rewind live TV. It accomplished this by sending user commands through a central content server, which one assumes would have been transferred over a primitive coaxial cable (since there was no broadband or WiFi back then). Sounds not all that different than Microsoft’s Xbox Live service, which just recently started offering live TV broadcasts, or bits and pieces of DirecTV, Dish Network, and even some current cable carriers.

The Apple Interactive Television Box was cancelled for unknown reasons before it ever entered mass production, but prototypes turn up every now and then. If you’re a serious Apple fan, then I suspect you’ve heard of this one. To this day, a favorite rumor that the mongers can’t get enough of is the notion of Apple entering the video game console business. It’s an enticing prospect, because there’s no doubt Apple could do a game console if it chose to, and they’d do it extremely well. (This rumor just resurfaced recently when a report was published claiming Apple CEO Tim Cook visited the offices of Valve Software, makers of Half-Life, Team Fortress 2, Portal, and the Steam game download service. The report was completely false, by the way.) But Apple has claimed time and again in recent years that they have no desire or intention to enter the console business.

The longevity of these rumors probably stems all the way back to 1995, when Apple really did design a video game console, which they named Pippin. Apple dreamed Pippin up, but left its production in the hands of game publisher Bandai, who was looking to enter the console race. (At the time, Sega’s Saturn, the first PlayStation, and the PC were the dominant consoles. The Nintendo 64 was still a year away.) Pippin sported a 4x CD-ROM drive, a 14.4kbs modem, and it ran on a specialized version of Mac OS 7.

Pippin was a licensed technology that Apple hoped to rake in profits from, but they and initial partner Bandai failed to think a few things through. First, they marketed it not only as a game console but as an Internet appliance for your TV; not a bad idea in theory, but with a price tag of $599, it was too expensive to justify as either class of device. (Other consoles at the time ran around $400; Nintendo would soon stun gamers with an N64 launch price of just $250.) And then there was the sad lack of game titles available, since no one made games for it except Bandai. Less than 100,000 Pippins were manufactured before it was discontinued in 1997.

Had Pippin succeeded, it’s conceivable that future iterations of the device could have incorporated aspects of Apple’s Interactive Television Box, slowly evolving into a real contender for living room dominance. With Steve Jobs back at Apple’s helm and the company getting back on track, QuickTime briefly rose to the forefront of Apple’s TV convergence strategy, with the advent of the “QuickTime TV Network.” QuickTime version 4 was used to stream clips from major networks like CNN, HBO, Disney, MTV, and more, straight from the QuickTime app itself. Although Apple made a lot of noise about it at the time — Jobs himself announced it during his keynote at MacWorld ’99, another Apple exec touted it as “changing our concept of television” — it was never the hit Apple was hoping for.

It quietly fizzled out somewhere along the line, though no one really seems to remember when. It was probably sometime before… A long-awaited feature came to the iTunes Store — which up to this point, had sold only music — in the form of TV show episodes for sale. Apple wasn’t able to get most of the major TV networks to play ball as quickly as they’d hoped, so at the special event where “TV on iTunes” was announced, only Disney-owned ABC was selling its shows to shoppers. The others would jump on the iTunes train soon enough, though, and the standard would be set at $1.99 for a single episode of your favorite television show.

It may seem little more than a footnote in the grand scheme — especially since iTunes never offers live broadcasts — but consider this. Apple needs to maintain strong relationships with all of the major television content providers if it has any chance at putting a dent in the TV hardware marketplace. Bringing TV shows to iTunes was Apple’s first step toward building those relationships.

It was initially introduced as a means of easily connecting Macs to television sets, so all that iTunes content could be accessed on the bigger screen, Apple TV would later evolve to include streaming media capabilities, where users could access iTunes directly from their televisions and stream movie and TV rentals without the need for a computer. Apple TV has never been a big success for the company, but they’ve stuck with it for five years now, gradually improving its hardware and software while quietly adding additional content like NBA League Pass, Netflix, Vimeo, and more.

Apple still qualifies the Apple TV appliance as a “hobby,” but… Is that all it is? Might Apple TV secretly be a means for Jobs and his disciples to experiment and test out their ideas for a real Apple television set? Separating some of the final intended TV’s components from the physical screen might have allowed Apple to create something that was far less expensive to manufacture than a TV, and therefore more economical for testing out their TV ideas.

It’s a no-brainer that all of Apple TV’s capabilities will be included in the TV set that Apple is preparing to unleash upon the world (along with plenty of other features like Siri and FaceTime), so it stands to reason that Apple TV might have been planned all along as the foundation that Apple would build its television business on. And I wouldn’t be surprised to see the tiny black box (it started silver, as seen above) go away once the full-fledged TV set arrives.

After all, the iTV or iScreen or iPanel or whatever-it’s-called is sure to make Apple TV — and everything else that came before it — look like stone-age technology.