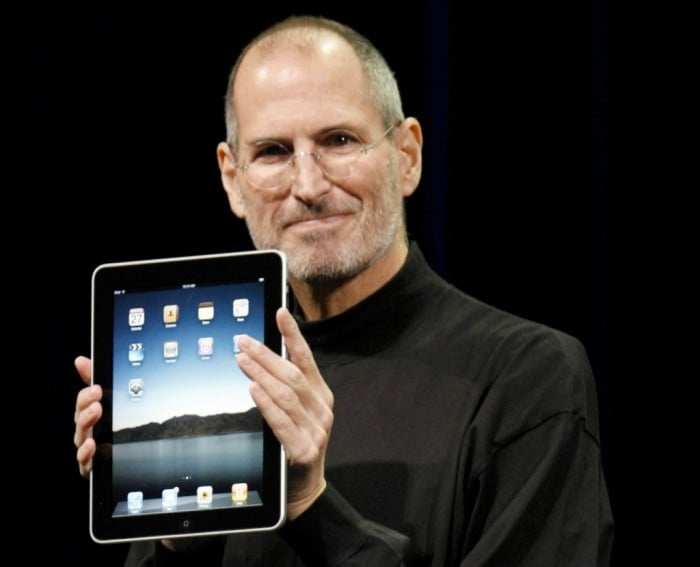 If Steve Jobs was a maestro, the keynote speech was his symphony. No one in the world could deliver what was basically a glorified powerpoint presentation with the commanding presence that Jobs possessed. He was smart, relaxed, focused, and best of all, entertaining. Here are his 7 best and most memorable keynote presentations.

He was in top form, never better. Pundits had speculated for years that Apple was working on a mobile phone, but no one had any idea the game-changing bombshell that Jobs was about to drop on the world. No one but Jobs, that is. He had a revolution waiting to begin, and he knew it, because he was on fire. “We’re going to make history today,” he declares near the beginning of this keynote, and as usual, he was spot-on.

I can’t help but contrast this one against the iPhone’s introduction, because it was an equally revolutionary device. But the differences in the presentations couldn’t be more potent. Jobs was as close as he ever got to downright giddy when he debuted the iPhone, but endless leaks made it impossible to keep the iPad under wraps. So he toned down the dramatic flair — toned it WAY down — and made a much more understated presentation. The public’s response was much more guarded this time as well, with people calling it an “oversized iPod Touch” or cracking jokes about the name’s similarity to a Maxipad. But when people finally got their hands on the iPad for the first time, they realized that this was something new that would change modern computing forever. Did Steve know at this keynote? Hard to say, because he plays it much more guarded. Either way, lowering expectations with a dazzle-free event was a smart instinct.

It was the music shot heard round the world. A moment in time that changed entire music industry forever. And it’s a brilliant example of Jobs’ dynamism on stage. Very possibly his defining moment as an orator. He doesn’t merely unveil or demo a new product, he tells a story. He hits the big talking points, emphasizes the soundbites for media to repeat (“1,000 songs in your pocket”). (This video continues with Parts 3 onward.)

One of the most dramatic news stories in Apple history was the fight that took place between Cupertino and news blog Gizmodo over the infamously lost iPhone 4 prototype. Apple had become synonymous with secrecy over the years, and was playing its cards close about the next big release of the iPhone. But one very unlucky Apple employee took his prototype iPhone 4 to a bar, and accidentally left it behind. It was found by another patron and eventually sold to Gizmodo (at a hefty price tag) for an exclusive story that would bring the blog into the public eye like never before. Things spiraled downhill fast, with Steve, once an avid fan of Gizmodo, enlisting the help of the police to raid the home of Gizmodo’s EIC to get their missing device back. (To this day, Gizmodo is still banned from all Apple events.) When Steve finally took to the stage to “unveil” the iPhone 4 — a device that pretty much everyone had already seen — all eyes were on him, because it was the first and only time he would address the big news story in public. There was electricity in the air and in the audience, and you can still feel it when you watch this video.

Even at this early point after his return to Apple — this is the same keynote where he announced that the “Interim” had been removed from his title as CEO — Steve Jobs had this crowd eating out of his hand. Looking back at this unveiling of OS X to the world for the very first time is quaint, as Jobs takes the time to explain little graphical interface elements that we take for granted today — and the audience gasps and applauds frequently, like he’s David Copperfield.

I had to include this one because, well, it’s just so darn CUTE. Anyone that knows anything about Apple at all knows that Steve had a major thing for technology that was ultra thin. He loved talking about how thin new products were or THINNER updated products had become. It could be considered a weakness on his part — frankly, thinner ISN’T always better — if it didn’t tap into that same “science fiction becomes real” cool factor that always wows consumers. When the MacBook Air was launched, Apple had achieved something that until then seemed downright futuristic: a laptop so thin it could fit into an envelope. Who even knew if there was an audience for a device that looked like you could break it over your knee like a twig? But at this keynote, that was kind of beside the point. He saved the announcement for his trademark “One more thing…” over an hour and ten minutes into the presentation, but even at that, Steve had a killer new toy, and he clearly couldn’t wait for everyone to show it off. The MacBook Air was a product that hit Steve’s personal sweet spot, and it showed.

This in-depth introduction to OS X Lion, iOS 5, and iCloud from earlier this year is historic because it marks Steve’s last keynote presentation ever, and his last major public appearance before his passing. And even in these last months of his life, when he was thinner and frailer than he’d ever been, he still owned the stage. This song and dance was so old hat to him by now, he could have phoned it in and still made headlines, but he was as lively and entertaining as ever.