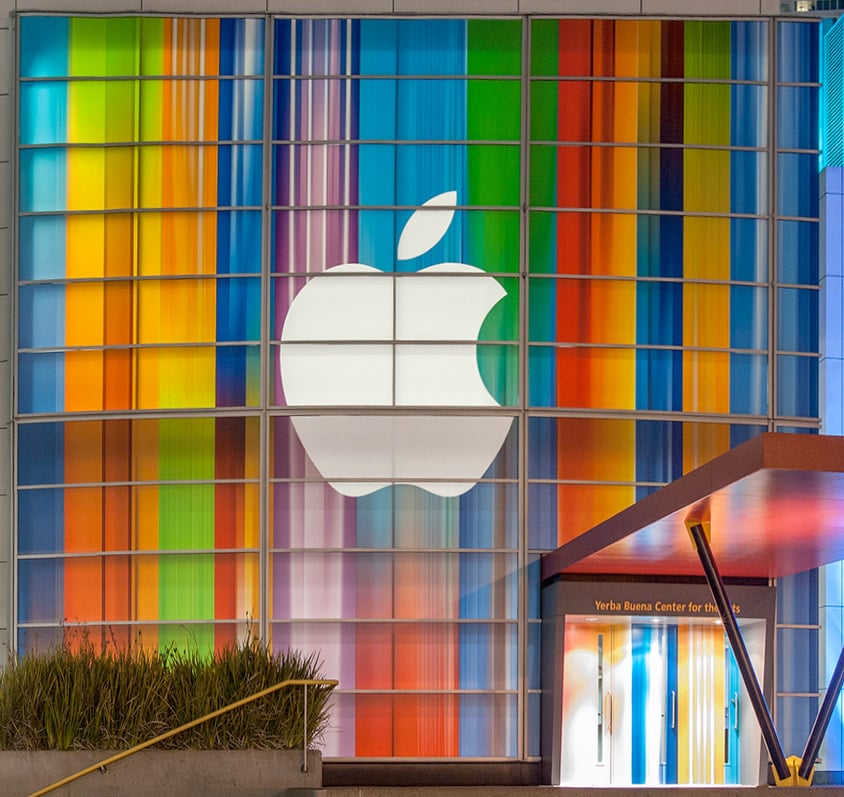 The iPhone 5 announcement is about to happen at the Yerba Buena Center for the Arts, Apple’s favorite venue for media events. Take a look at how Apple has literally put its mark on the building over the years.

Smaller, less flashy Apple events usually happen at the “Town Hall” facility at the company campus in Cupertino. The biggest events are, of course, WWDC, with its enormous auditorium and huge stage. But when Apple has something to show off that’s exciting, that will be a particularly big deal in the mainstream media, like new media players or a new iPhone, they go to Yerba Buena Center for the Arts in San Francisco. Along with an upgraded selection of iPods, this was the event where Steve Jobs announced the addition of feature films to the iTunes Store. He also teased Apple TV with his “One More Thing…” Whether it was because events took place at other locations, or there were simply fewer events, Apple didn’t return to decorate the Yerba Buena Center again for two long years. This time, they decided to forgo the tiled decals that they usually stick to each individual window, and just create one giant banner to hang in front of the glass wall. A new lineup of iPods was unveiled at the “Let’s Rock” event. Probably most notably, the popular oval-shaped iPod Nano that came in bright, metallic colors. The graphic is a dead giveaway: yep, it’s another music event. Just like in the two events listed above, Apple used this opportunity to trot out the latest version of iTunes. (Version 9, to be exact. 7 and 8 were introduced at the prior two events.) They also upgraded the entire iPod line, with the iPod Nano getting a Flip-style video camera built in. The long-awaited debut of Apple’s tablet computer drew a media storm of attention that Apple didn’t even have to work for. The iPad may have been Apple’s most anticipated product of all time. But I’m not sure how these paint blotches were meant to symbolize its “magical” and “revolutionary” nature. At least they finally moved on from the silhouetted dancers. Arguably the coolest graphic Apple has ever used, this one signified the company’s annual music event. But there was a lot more going on than just tunes. An updated version of iOS brought along new features like Game Center, and this was the event where Epic’s Infinity Blade was announced (though it was code-named Project Sword at the time). For iPods, Steve Jobs introduced the square-shaped, multitouch iPod Nano that’s still sold today, and brought Retina Display to the iPod Touch. I think the dots on this graphic were meant to celebrate the anniversary of the original iPad, and to kick off “the year of iPad 2.” I think. For the first time in years, Apple did not hold a music event in September in 2011. Instead, they moved the iPhone event to October (taking place back at Apple HQ) and skipped the music event entirely. Bringing us to earlier this year, when the third-generation “New iPad” was premiered, with its huge Retina Display screen. The aforementioned iPhone 4S event in october 2011 was also noteworthy for taking place the day before Steve Jobs died. Another event, in January of ’12, was Tim Cook’s first time overseeing a media event as CEO, after Jobs’ passing. For the first time ever, Apple is holding an iPhone event at Yerba Buena. Does this music-centric location mean we’ll also see a long-awaited refresh of the iPod lineup? Will Cook also show off the heavily-rumored iPad Mini?