You are here: Home / Feature / 9 Apple iDevice Concepts (That Will Never Be Made) 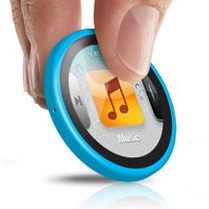 Not coming to an Apple Store near you, anytime in the future: here are nine fan-made Apple product concepts that range from the clever to the downright crazy. Apple has made cameras in the past (and they were far from successful with them), also called “QuickTake,” but this updated concept is kinda cool. Its flat form factor is like no other camera on the market, with the same great camera that’s in the iPhone 4S married to an enormous screen. The screen isn’t touch friendly, but it swivels so you can watch the action from behind, or watch it while you’re in it. The peripheral buttons are well thought out as well, with a 30-pin dock connector, physical power and shutter buttons, a tripod dock, and more. I’m tempted to think there could be a market for something like this, but Apple already does so well with the cameras built in to iPhone and iPad, a standalone camera feels unnecessary. [Image source.] What I like about this concept is that it conforms to Apple’s aesthetics of simplicity and user-friendliness. These headphones are big enough to cover your entire ear, and thus provide far superior noise cancellation than ear buds, but the connector goes behind your neck, so there are no “headphone hair” issues. The cans stay on your ears thanks to the connector’s elasticity. And you’ve got to love that retro coloring. [Image source.]

This one is pretty darn brilliant. Photoshop users are familiar with the color dropper tool, which lets you sample any color from any image Photoshop can open. The iDrop brings that idea into the real world. It’s a pen-shaped device that lets you sample colors from absolutely anything. Flowers. Wallpaper. Carpet. Asphalt. You name it — if you can physically touch it, iDrop can sample its color and import that color into your Mac. Genius! [Image source.]

It has that wow factor that we love in our Apple products, but I’m not sure how useful it would be. The iPad has taught us that keyboards without tactile feedback are nearly impossible to type on normally (most of us resort to thumbs for iPad typing). I like the idea of having a configurable keyboard, though. You could put the keys on whichever end you like, switching it with the multitouch pad. But until Apple devises a way to put adaptive tactile feedback into its screens (which they are working on), there’s just no use for something like this. [Image source.] Yeah, it’s totally pie-in-the-sky. But c’mon. This is just cool! I love how it smartly uses the holographic “screens” to represent multiple desktops/windows. Even the Dock is a separate element, with icons that float in mid-air. [Image source.] We already have an iPod the size of a watch face, so why not one the size of a button or a coin? Because it would be too easy to lose, that’s why. And there’s the small matter of making a round screen. [Image source.] Might the iPod Shuffle look like this in eight years? It’d probably be awfully hard to get Flash memory and other components into a half-moon shaped device, but in almost a decade? It could happen. Doesn’t match Apple’s usual design aesthetic or colors, but who knows what Apple’s norm might be eight years from now? [Image source.] This one wonders what iTV would be like if it were a projector instead of a big-screen TV. Yes, it looks like a hair dryer propped up on an iMac stand. What’s your point? [Image source.] That tactile feedback we were looking for from the Touchboard (above)? Here you go. This one uses “NanoSkin” technology to send and receive “touch signals,” as well as reconfigure itself as a keyboard, touchpad, and any other kind of touch input device. Imagine being able to physically touch objects on your screen — and they would feel the way those virtual objects might feel in the real world. (The iTunes icon, for example, is like a ball or a tiny dome; if you could touch it, is that what it would feel like?) Its creator designed the iSolate as a treatise on the dangers of human isolation as brought on by technology (hence the name), but that doesn’t make it any less intriguing of a concept. [Image source.]