You are here: Home / Feature / 7 Things that Suck About Windows 10 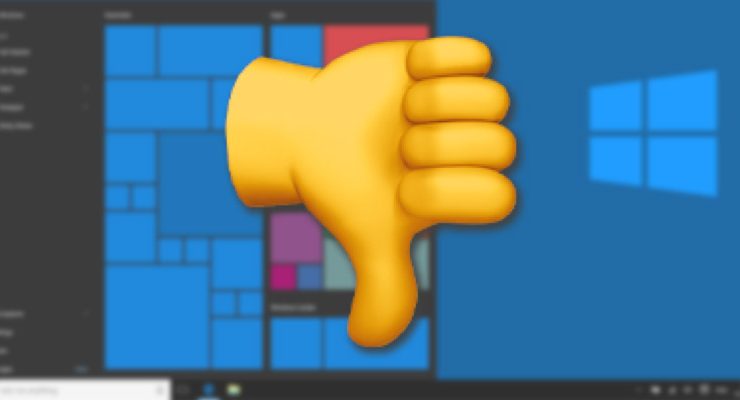 Windows 10, while still the most-used desktop operating system, gets plenty of flack. And it absolutely deserves it. Here’s our abridged list of things in Windows 10 that are as bad as stepping on a Lego.

Perhaps the most obvious gripe with Windows 10 is its auto-update (and auto-reboot) process. No one likes to have an update forced upon them, but Windows is all too happy to do so. Worse, you often can’t fix it. The controls for reducing updater aggression are intentionally missing from the Home license, the most common version of Windows. Microsoft tells us this makes Windows 10 safer, and that’s not totally false. Failing to update computer software is almost always a security risk. That’s one reason WannaCry was so effective. But if poor update adoption is a problem, then Windows has a design problem. The laziest, crudest way to solve that problem is removing or hiding the “No” button. For example, the Calculator app appears in search only when the mood strikes: it appeared in the search results when I typed “cal” but disappeared the second I added the final “c” to make “calc.” Sure, rebuilding the index can help, but it quickly rots into disrepair again.

This appears to be another feature that Microsoft wanted to patch in later, shipping fixes over the Internet after operating system releases. Either Microsoft’s well-known policy of shipping buggy features and fixing them later is to blame for such an incredible failure of a headline feature, or Microsoft’s programmers are utterly incompetent.

Bloatware is hardly a new scourge. Android has been ruling that part of the world for ages. In Windows 10 Microsoft forcibly installs garbage-tier games like Candy Crush on your computer. Removing these apps is only a temporary fix: users frequently find the bloatware apps re-installed after major updates.

Operating systems should not be displaying advertisements. Nor should they install third-party software you don’t want. But this is par for the course for Microsoft, a company that famously lost a high-profile anti-trust suit surrounding its policy of forcing users to install and use Internet Explorer in older versions of Windows.

Don’t forget telemetry! Windows 10 wants very badly to spy on its users. If they could, Microsoft would gladly capture a live video of your desktop at every waking moment. That would cause too much of an uproar, however. Instead, they just capture all the metadata: what you did with it, for how long, and so on. That produces just as complete a picture of your activity as a video might, but without the messy uproar from the marketplace. They call this data “telemetry,” and it’s supposed to have some utility in supporting the user and tracking down bugs. We’re sure it helps in some way, but why can’t it be disabled?

Do you value your privacy over a corporation’s need for bug reporting? Tough luck, sucker. Microsoft admits there’s no sanctioned way to completely disable telemetry. You must either fork over the extra cash for the Enterprise license, live with restricted limitation, or resort to registry hacks. This brings us to the following issue.

Oh, the registry! The hack upon which the rest of Windows lies. The reason your computer so quickly becomes a rat’s nest of broken settings and misconfigured applications, with ghost processes firing in the background and mysterious, unexplained entries clogging the index. Every application you install bloats the registry, adding entries that the uninstall system never reliably removes, causing unpredictable bugs.

The Window’s $USER folder is and always has been a horrific, snarled mess. It’s worse on Windows 10. The directory is treated like a public garbage dump, allowing any and all apps to take up permanent residence within the folder and break if the user cleans up after them. Files are vomited all over the system, with little rhyme or reason to their overall organization. The operating system enforces no hierarchy, allowing each app developer to do as they wish.

Universal Windows Platform (UWP) apps from the Windows Store don’t have this problem. In fact, one of UWP’s stated goals was solving the problem of uncontrollable installers. A casual glance through the Windows Store reveals that UWP didn’t bring most mainstream apps into the fold.

Uninstalling Win32 and .NET applications is just as bad as installing them. You might find that one unrelated app depends on the files installed by a totally different app. In fact, the operating system contains no protection against this happening. The only solution is to uninstall both and reinstall the one you want to keep. Otherwise, you’ll end up with a broken app requiring an arcane “repair” process.

Let’s put aside the fact that Window’s user interface is fundamentally hideous. That’s a given, coming from an operating system as purposefully attractive as macOS.

Windows 10’s user interface is a mish-mash of previous eras of Windows design. In a single screen it’s possible to see interface elements that are as old as Windows XP and as new as the most recent update. Multiple deeper system apps, like Event Viewer and Disk Management, remain untouched since the Windows XP era. Why? Because Windows leaves rarely-explored but functional parts of the operating system untouched for years a time. As a result, Windows 10 still heavily relies on the Windows 7 Control Panel interface that was supposed to be deprecated by Settings. There has been no push to rectify this mess of an interface. Even recently-updated elements, like context menus, look radically different depending on their parent app.

Conclusion: Will It Improve?

Like all companies, Microsoft cares about one thing: making money. The scale of corporate lock-in and the symbiotic nature between Microsoft and its vendors means that extricating Windows from even a small corner of the corporate world would be a life’s work.

USB-C Hubs Are Garbage: Here’s Why