You are here: Home / Feature / 10 Apple Patents We Want to Use NOW 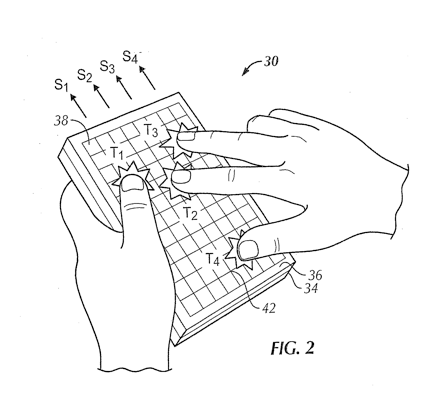 Nobody loves to patent stuff like Apple does. It seems that the Cupertino tech giant is filing patent applications on a daily basis. Here are 10 of their best-ever patents that have yet to be incorporated into products — but we hope they soon will be.

Looking at Apple’s patents these days, you can’t help wondering if Apple is just dreaming up scifi tech of the future, with no actual basis in any existing technology. Because some of this stuff is way out there (yet undeniably cool).

The patents you see here are in various states of ownership; some have been awarded to Apple by the Patent Office, others have merely been submitted for approval. And it’s worth noting that just because a patent is filed doesn’t mean that the technology will be implemented. It’s common practice for tech makers to register their ideas merely to keep others from registering the same thing. Eliminating the problem of requiring different-shaped docks for different devices, this intriguing patent features a sponge-like dock that molds and conforms to the shape of whatever iPod, iPhone, or iPad model you own. I have no idea how technology will make such a thing possible, and I can’t help looking at it and wondering how long it will be before it comes to life growls, “Huuuuuuungryyyy…” Consider this one many years away. [Source] Long, long overdue, here’s a patent for coating the glass surface of an iOS device with a substance called an “oleophobic,” which is oil-resistant. Basically, it keeps fingerprints off your screen, which anybody with an iPhone or iPad would welcome. This one is reportedly nearly ready for production, so we might see it integrated as soon as iPhone 5.Â [Source]

iDevice With Built-In TV and DVR One of the holy grails of modern technology is the mobile television. Some companies have made great strides toward this goal, and Apple itself was among the first to make possible the purchase or rental of TV episodes. But live television has yet to be implemented in a way that’s both pleasing and affordable to the masses. Apple’s patent for both a live digital TV receiver and built-in DVR for recording is a no-brainer of an idea, and if Apple beats other tech giants to the punch and applies its trademark simplicity of use and cool factor to its implementation, this could be a game-changer. [Source] Apple has never been terribly excited about embracing video gamers, which makes this patent a welcome surprise. In essence, it’s a software scheme for using the iPhone’s accelerometer, GPS, and gyroscope in conversation with other iPhones, opening up a whole new world of gaming for iPhone owners. Because it would make apps like augmented reality games into multiplayer extravaganzas. With every phone always knowing where every other phone in the game is, games like lasertag would be easy for developers to create. Shooting could be as simple as aiming with your camera, lining your target up with the on-screen reticle, and then tapping the screen to shoot. Then your opponent’s phone would immediately alert them that they’re “dead.”Â [Source] This patent is notorious more for what it implies than what it actually says, because it proves beyond any lingering doubt that Apple’s plans for the future do indeed point to a convergence between iOS and OS X. Or, if you prefer, iPad and iMac. Despite Steve’s claim a while back that users don’t want to touch their computer screens, Apple is working on that very thing, combining touchscreen computing with high-powered desktops and laptops. The patent itself is for a system whereby this merged device would automatically know when you switch from vertical, iMac-like screen use, to horizontal, iPad-style use, and change the OS’s interface accordingly.Â [Source] Much like Microsoft’s cutting-edge Surface table device, this patent is for recognizing objects that are placed on your computer’s screen. It could be commonly used to sync your iPhone by just touching it to your iMac’s screen, or paying for online goods with a credit card by simply placing the card flat against the screen. [Source]

Another long overdue innovation, this technology creates a narrow angle of space where a screen can be viewed. When the only person who can see the screen is the user, looking at it straight-on, the nosy person beside you can no longer watch your Angry Birds slingshot moves or read your email. Don’t let the iPod Classic in the diagram fool you; most patents are filed years ahead of their usage, and this one is likely no different. [Source] A solar-powered iPhone or iPad is not an earth-shattering notion, but leave it to Apple to put an ingenious new spin on an old idea. This patent hides the solar cells beneath your device’s screen. So all you’d have to do to charge up your device is leave it screen-up in direct sunlight.Â [Source] Gorilla glass is so last year. Apple wants to leap into the future with a dynamic screen — made out of an unknown substance — with an “articulating frame” surface that can raise or lower in certain spots. Think of the liquid metal Terminator from T2 growing a tactile keyboard out of the smooth, flat surface of a touchscreen. Call them “magic buttons” if you want, that can raise up and depress when in use, but such a profoundly futuristic technology has limitless potential applications. I wouldn’t hold my breath waiting for this one anytime soon, but it’ll be a jaw-dropper if/when Apple makes it happen. [Source] Based on technology from startup Siri (which Apple purchased in 2010), this patent would allow for complex commands to be given to iOS devices via nothing but your voice. The patent cites as an example, a command like this: “find my most played song with a 4-star rating and create a Genius playlist using it as a seed.” Unlike many of Apple’s pie-in-the-sky patents, this one seems likely to be used in the near future. This is another one that could come about as early as iPhone 5. [Source]