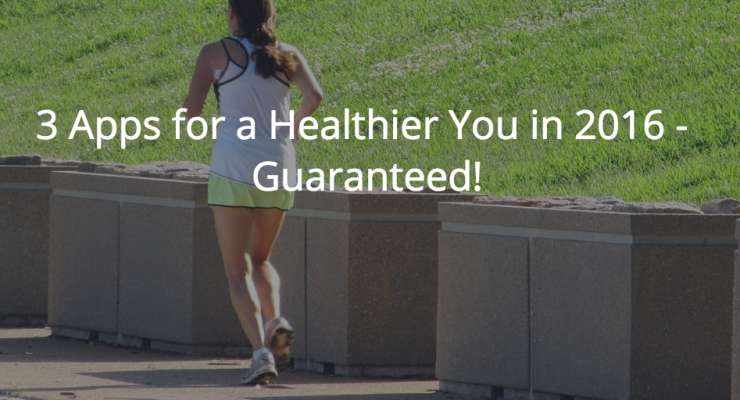 You’ve probably read all sorts of articles about the best apps from 2015, the apps you must have for 2016, and everything in between. I don’t blame you if you’re having an app recommendation overload at the moment.

However, if one of the things that you truly want to do in 2016 is to be a healthier person, I suggest that you take a look at these apps.

They’re only three, but I give you my personal guarantee, that, if you use them together, you’ll get results. I’ve used them in the past year, and I say unequivocally that they work. It’s got quite a bunch of features – a blog and social sharing included – but what I use is the food diary. I make it a point to enter every single thing I eat (okay, sometimes I miss something).

What I like: It allows you to set goals such as target weight, how much weight to lose in a week, and how many calories you can eat each day to reach your goal. It takes into account the active energy you expend during the day and adjusts your allowed calorie intake accordingly.

What I don’t like so much: The database of food can be confusing as there are many duplicates with different values. As such, there are times when you have to guestimate what you’re eating. Unless you’re totally OC, though, I think it shouldn’t be that much of a deal. One sentence: Human is the only app that was able to motivate me to get off my butt and walk and jog regularly.Â

The concept is not unique – it tracks how long you walk/run/jog, how much mileage you’ve had, and how many calories you’ve burned. What’s cool is their little words of encouragement – some are quite hilarious like “Beyonce wants to know where you work out!”.

What I like: I’ve said it all above, but a bonus: it incentivizes you even more by keeping track of your streak – how many consecutive days you reach you goal (minimum of 30 minutes a day). Oh, and they have awesome customer support!

What I don’t like so much: I’ve had some problems with the app not tracking my movement. It also can use some improvement in terms of accuracy – sometimes it counts walking as biking or jogging as walking, etc. If you’re shaking your head already because of “yoga”, hear me out.

Truth be told, I used to say that I wouldn’t touch yoga with a 12-foot pole. Then one day, I tried it – just for the heck of it. Actually, it was because a friend had opened a studio. I found out that yoga isn’t for wusses. It’s tough, but at the same time relaxing. That was several years ago, and I didn’t last long.

This year, though, when health issues prompted me to start a lifestyle change, I decided to take up yoga again. Being the homebody that I am, I didn’t want to go to a studio anymore. Good thing that I found Yoga Studio when it went free for a time.

What I like: It has various levels – from beginner to advanced. It offers pre-set classes (videos) for each level, with different lengths and focus (strength, flexibility, etc.). It also provides in-depth information (videos and text) for each pose so you can make sure you’re doing it right.

What I don’t like so much: I honestly can’t think of anything right now except that some of the poses are crazy hard, but that’s not about the app.

The best thing about these apps is that they all have Health integration. You just need to adjust the settings so that they can all exchange data.

Activities recorded by Human are reflected in MyFitnessPal.Health makes adjustments – if necessary – with iPhone steps. Yoga Studio classes are detected by Health app, which then adds the active calories burned in MyFitnessPal.

As I said from the get-go, using these apps together is a sure-fire way of working towards a healthier you. Why not try them out and see what happens?

5 Ways to Use Apple’s Health App