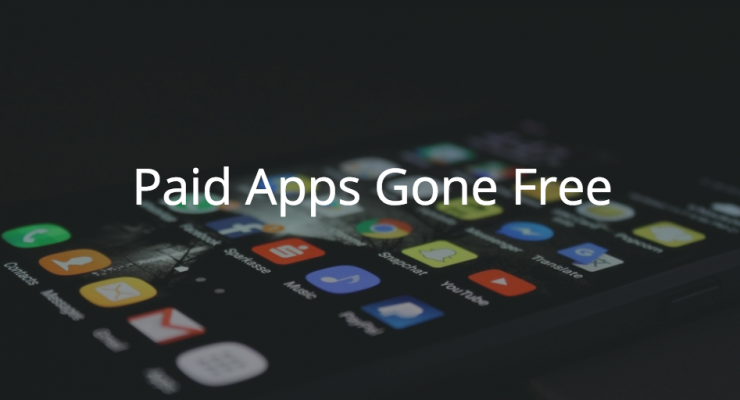 Ready for the week? Here are free iOS apps to have a nice start.

(Note: These apps are free as of this writing; they will go back to their regular price anytime.)

Can an app really make you feel better? We think it can.

The Stress & Anxiety Companion app gives you the tools you need to manage anxious feelings and identify their triggers so they won’t trip you up in the future. It can help build your mental muscles to make you stronger and happier. Some of our features include:

• Re-Breathing: control your breathing with the help of our visual exercises.

• Mindfulness and muscle relaxation recordings to help your muscles relax and ease tension.

• You can’t change what happens, but you can change how you feel about it. Our app helps you reframe negative and anxious thoughts, building your mental muscles so that you can cope much better with life’s ups and downs.

• Our simplified CBT process (it’s short for Cognitive Behavioural Therapy, a technique that’s helped thousands of people) helps you identify triggers and their associated thoughts, replacing those thoughts with new ones – not just today, but every day.

Your city has been invaded by hordes of hungry zombies, your only goal is to escape and save yourself as fast as you can before being eaten by some horrible undead!

Make your way through the walking dead slaughtering them with your Chainsaw and blasting their brains with the Shotgun before it’s too late!

Use the Skateboard and your acrobatic skills to get through obstacles and avoid the runaway cars, and take advantage of the explosive barrels scattered around the environment to create a devastating hellfire!

Run like hell in this adrenalinic adventure with horror / splatter atmosphere, the survival of the human race depends only on you!

Features:
– Dodge obstacles and perform stunts of all types by swiping your finger on the screen!
– Use the Chainsaw and the Shotgun to smash the zombies!
– Use the Skate Mode to run at full speed between the zombies and trample everything!
– 3D graphics of the highest quality and in Full HD!!!
– Collect coins to buy several items and power-ups in a well assorted virtual store!
– Supports GameCenter: compete with players all around the world thanks to leaderboards and achievements!
– Universal App: runs in HD on iPad and Retina Display devices.

What happens when two rival gangs of riders come into conflict? Well, they do battle racing through the streets at top speed!

Ride your trusty moto, face rivals in the streets of the city zipping between vehicles at reckless speed and kick your opponents until they fall to the ground!

Become the reckless moto king of the road! But watch out for the cops, do not get caught!
How long can you last without getting caught by the cops while traveling at breakneck speed between a vehicle and the other, chasing your rivals?

If you manage not end up crushed under some vehicle then you’ll have a variety of items that will grant you an advantage over others, first of all your special supply of super-beer that will make you indestructible!

Reckless moto riders, start your engines and .. engage in this insane and deadly race.

The invasion of Earth has begun!

The Alien invaders are setting up their bases in the heart of the tropical jungles of the planet and everything now seems lost… but fortunately the human race have Zambo on their side!

Zambo, the arsenal man, alone is worth a whole army! Equipped with bombs, pistols, machine gun, plasma gun, flamethrower and bazooka …He is an unstoppable force! And what of his powerful robot “the pulper” that he can drive in battle?

Who can stop you? Run through the jungle to fight the horde of horrible and slimy alien creatures from other worlds! The mission is to destroy all the alien spacecrafts’s cores and eliminate the enemy.

The war has begun, play as Zambo and go down in battle now!!

Features:
– Complete missions and destroy all the alien spaceships!
– Equip a variety of weapons and smash to pieces all the monstrous enemies!
– Enter robot mode, become invulnerable and get the maximum firepower!
– 3D graphics of the highest quality and in Full HD!!!
– Collect coins to buy several items and power-ups in a well assorted virtual store!
– Supports GameCenter: compete with players all around the world thanks to leaderboards and achievements!
– Universal App: runs in HD on iPad and Retina Display devices.

The ultimate Western action RPG has arrived on iOS! Embark on an epic dark fantasy in the grand tradition of great, story-driven RPGs from PC and console, created by veterans of the Neverwinter Nights, Baldur’s Gate, and The Witcher franchises.

With The Shadow Sun, Ossian Studios brings together all its expertise from working with Dungeons & Dragons and The Witcher in order to create a deep, story-driven RPG experience for iOS. Prepare yourself for visceral real-time combat, a gorgeously detailed world to adventure in, complex characters to interact with, and an epic tale of an ancient city held within the grip of a mysterious plague.

Enter a world that has felt an alien touch upon its sun. An ever-increasing shadow that creeps across the sun’s brilliant face, with consequences that are only now becoming horrifically apparent…

HOURS OF ADVENTURE
• A 10-hour adventure where you explore the decadent imperial city of Shar and the exotic desert lands around it, delving into a story filled with intrigue, danger, and shocking surprises.
• Explore over 70 unique areas and uncover 200+ unique items, hidden secrets, and ancient treasures.
• A handy journal tracks your quests and a detailed codex notes new characters, places, and creatures you encounter.
• An original orchestral soundtrack and amazing soundscape will immerse you into this dark fantasy world.