You are here: Home / Apps / The Best Alarm Clock Apps for iPhone 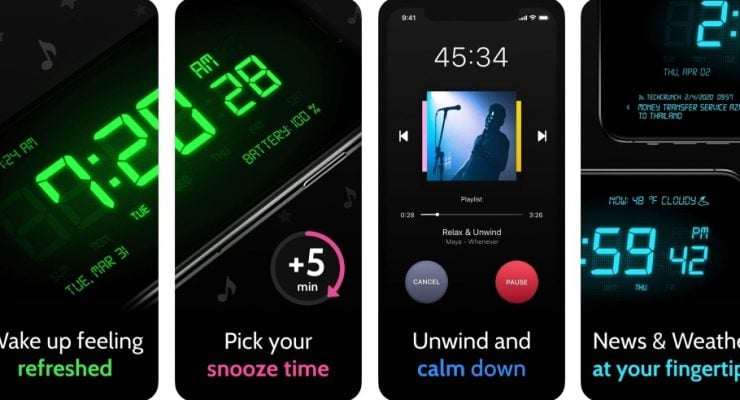 Yes and no. There are several alarm clock apps on iOS that – believe it or not – are a life changer. It doesn’t just make a sound when the time is up and that’s it. Unlike regular alarm clock apps that do exactly this, third-party alarm clock apps have other features as well. Hence, you can’t just hit the snooze button over and over again then realize that you’ve overslept for an hour. These alarm clock apps are designed to really get you out of bed at the designated time.

For the heavy sleepers, Alarmy would probably be your best bet in terms of really waking you up. It offers the basic features of an alarm clock app: standard alarms, snooze period adjustments, and a plethora of alarm sounds to choose from. However, what sets this app apart is its unique feature called “Missions.” These are tasks that you have to perform to make sure that you’re already awake before you can turn the alarm off. They include scanning a QR code and solving math problems. If this doesn’t wake you up, we don’t know what will.

Do you always sleep through your alarm? Just as the name implies, the Loud Alarm Clock’s goal is to wake you up by giving off a resounding, often irritating sound. The tones it uses are what some would consider noises that they just can’t stand. These include nails on a chalkboard, just to give you an idea. After some time, you might get used to the sound and it won’t annoy you anymore, so you can choose to have a random sound every morning.

Instead of having different tasks per alarm, Spin Alarm Clock only has one task for you each time you wake up: spin. That’s the only way to turn off its alarm. Of course, there’s that snooze button, but you can opt to be strict with yourself and disable this feature. You can even add features to your screen when it alarms, like the weather and some notes. While spinning might make you more dizzy than awake, it’ll at least force you to get up and start moving.

Alarm Clock for Me

Something a little more simple but still useful is Alarm Clock for Me. This app has a minimalistic design and offers just the right practical features to get you up from your sleep. If you’re not a heavy sleeper anyway, maybe the regular tones or music are enough to wake you up. However, you can opt to also include tasks per alarm, such as solving math problems. This app is free too, so you can try it out anytime.

Working double time not just as an alarm clock but also as a sleep tracker is this app called Sleep Cycle. With this app, you’ll find out how long your sleep is and how deep or well it was. In addition, you’ll also know how often you snore! You can’t deny it this time, since this app keeps track of it. Because this app tracks your sleeping progress, you can also set it up in a way that it won’t wake you up during your deep sleep, which is highly important. Once you’re in light sleep mode, it can trigger the app to start alarming with a more melodious sound so you don’t jolt right up.

AlarmMon is perfect for artsy people who want their alarms to be animated. This app isn’t the standard alarm clock where you just set the time and the alarm tone, and that’s it. Here, you get to choose a character right when you first open the app. Depending on which character you choose, there will be games that you have to play every time your alarm sets off for you to be able to disable it. It can range from basic rhythm games to math problems. If you ask us, AlarmMon makes waking up a little more fun and might even be something to look forward to every morning.

For a more functional app for people who want to be updated on the news, Alarm Clock HD is a great option. Apart from the fact that you can set unlimited alarm clocks, you can also get the latest Tweets and news using this app. You can even find out the weather using this app. Tired of the generic alarm tones? With Alarm Clock HD, you can choose your own alarm music from your iTunes library. That way, you can wake up with your favorite tunes every day. This should put you in a good mood first thing in the morning.

Light or sensitive sleepers may appreciate an alarm clock app like the Progressive Alarm Clock. Instead of giving off resounding alarms that’ll jolt you right up, this app will progressively wake you up in a way that’ll feel like you’re waking up naturally. It wakes your consciousness by increasing the alarm sound slowly. Also, it doesn’t use annoying or loud sounds. Instead, it utilizes the sound of Tibetan singing bowls, which are calming and soothing.

Check out other cool apps