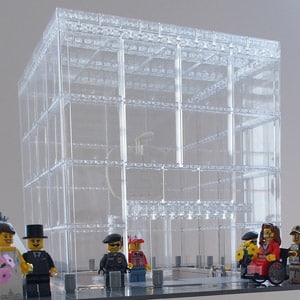 LEGO fans have a long history with Apple making accessories for their devices and other homages for ages. Check out these 10 amazingly detailed recreations of famous Apple Stores made entirely out of LEGO.

Note: the store links in each description will take you to that store’s official homepage on Apple.com, where you can compare the real-life version with the LEGO versions seen here. As Apple’s most iconic store, the 5th Avenue “Cube” store has inspired many a re-creation in LEGO. But this one is undoubtedly the best, because it not only depicts the glass cube accurately, it includes the subterranean shopping area too. And just check out that glass staircase. Among other things, you can see a line of Minifigures waiting to buy the latest gadget, a couple of Segways, a wheelchair, and a wedding taking place just outside the store! [Image credit]

The clean lines of the Lincoln Park store in Chicago are nicely depicted in this build that’s made to Minifigure scale. It’s got some nice window displays, too. [Image credit] This nifty model comes complete with a diorama on the reverse side. I love the spiral staircase, particularly how it depicts the way that Apple’s glass staircases are suspended without support from below. And look closely and you’ll see Steve Jobs in the bottom right corner. (I think that’s Woz on his Segway next to Steve, too.) The front of the store isn’t modeled after any store in particular, but it shows the big, silver front that’s used at many a store, such as the one at Deer Park, IL. Hit the image credit link to see several more pictures. [Image credit] Another well known retail location is shown in this one: the Upper West Side store in New York, with its unique diagonal glass front. It’s part of a larger “LEGO City” creation. It’s especially impressive because anyone who’s ever built with LEGO bricks knows what a challenge it is to do diagonals. [Image credit] I like the golden hue emerging from this reproduction of the Munich store in Germany. It’s got a nice attention to detail, too, like the black lamppost outside. [Image source]

The familiar steel-and-glass façade seen on so many Apple Stores is shown on this one. It doesn’t seem to be modeled after a specific location, but I think it looks a lot like the Salt Lake City store. [Image source] This is the Clarendon store in Virginia. It’s not as big a store as the others on this list, but someone loves it so much that they took the time to produce a faithful model. [Image credit] Is this the Boylston Street Apple Store in Boston, MA?

I think this one is meant to be similar to, or perhaps inspired by, the Boylston Street store in Boston. But I’m not really sure. There aren’t a ton of Apple Stores that have glass fronts as gigantic as this, and I don’t know of a store that this more closely resembles. If you think it’s a different store, let us know which one in the Comments area. [Image credit] There’s no exact match for this model, but it makes me think of the old-world architecture featured in European locations like the Valencia, Spain store. I had to include it because of its awesome details, like the iPod ads featuring Minifigs. Brilliant! [Image source] Sydney store in Australia… and some unknown guests

Finally, we come to the massive Sydney store in Australia. Don’t bother asking who or what the bizarre Bat/girl/eagle/Green Lantern thing is supposed to be that’s sitting on the roof. Don’t have a clue. At least she’s happy to be there. Hopefully she’ll stop that giant red and orange creature from smashing the store’s glass. [Image source]