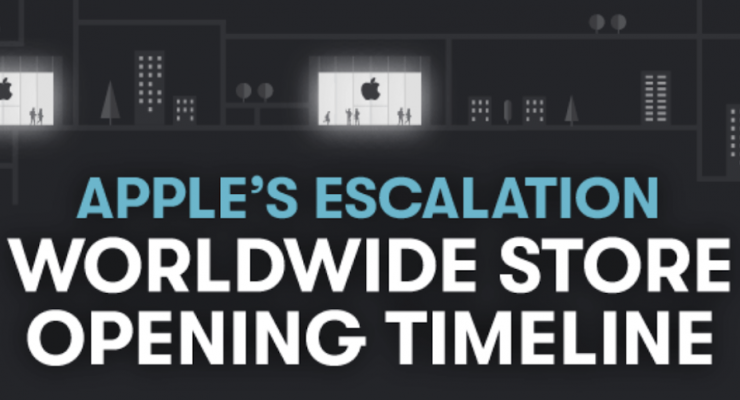 Apple celebrated its first store opening on 15 May 2001 and now has over 506 stores across 24 countries.

Apple is arguably one of the most successful and innovative companies of the 21st century. The tech giant first went public in 1980 and originally it was worth roughly $100 million with the CEO and Founder, Steve Jobs, taking the technology industry to a new level.

In 2001 the United States of America saw 27 stores opening across the country and the first store to open outside of the USA was in Tokyo, Japan.

Steve Jobs personally showed journalists around the first Apple store that opened in Tysons Corner, Virginia USA, back in 2001.

Original data from RS Components has shown that, on average, 29 Apple stores open every year all over the world. Each store opening costs between $8.5 and $10 million to build and refurbish. With that said, the opening of Apple stores around the world costs the company nearly $290 million a year.

Nevertheless, the company’s annual revenue is over $250 billion, so the costs of Apple store openings each year is just a small fortune in comparison to their revenue.

2004 saw the next store opening outside of Japan and the USA – the Regent Street store in London, the UK, which opened on 20th November. That is when Apple then began to expand its global presence.

Apple is the first company in America to cross the $1 trillion value. An expert says “The company has a knack for pairing new technology with innovative business models.”

So, where will Apple open their next store and just how many can we expect to see open in the next 10 years?

For more information, visit RS Components to see just how rapidly Apple opened up all of its stores worldwide.