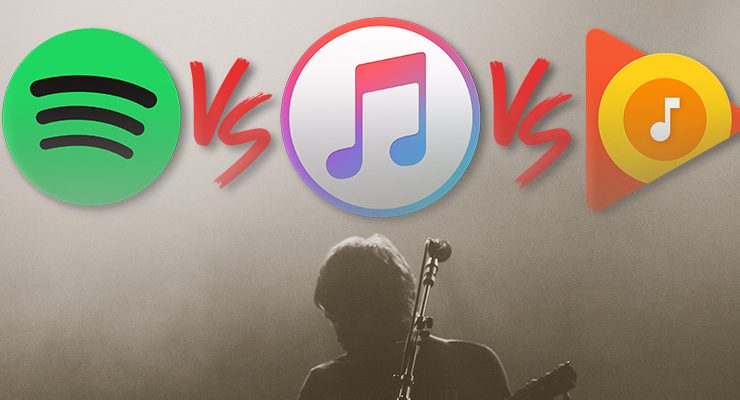 The three main giants of the streaming music industry are all broadly similar. They have similarly large libraries, near-identical monthly fees, and similar feature sets. So what’s the best music streaming service for Apple users? Spotify is the current gold-standard for a streaming service. However, the services apps are far from perfect.

Spotify’s best features include an absolutely expansive library, a huge collection of user playlists and a fairly intelligent radio station algorithm. Personalized weekly playlists, generated by the Spotify algorithm based on each user’s previous listening, are another standout feature. The service is enhanced by support from a huge range of third-party devices, like car radios and home entertainment systems.

Support for exercise is also well done. There’s a “Running” feature that’s somewhat hidden in the application, which plays workout-specific music based on your current steps per minute. As someone who doesn’t listen to music while running because the BPM and my steps per minute rarely match, this feature was awesome. Once you’ve dialed in a BPM you’re comfortable with, it makes keeping pace far easier.

But the service is hamstrung by clunky, sub-par apps and a buggy, inconsistent web interface. The mobile app is crowded with pile of small but annoying user interface decisions. Accessing what you’ve listened to recently is unintuitive, as is moving around the app from song to artist to album.

Search is a particularly bad mess. Searching for a song and playing it from the search menu works fine. But it’s got some oddities. For example, after the song you’ve searched for is finished, the next song up is the next-best match for your search, whether it’s an exact repeat of what you just heard or a truly terrible cover by a no-name four piece. The app also saves partial search strings instead of the auto-completed variations, leaving your search history filled with “cla” and “jac” instead of “The Clash” and “The Jackson Five.” It’s an amazing service, but the app needs some love. Google Play Music could be a competitor one day, with a decent library, good custom playlists and a strong radio algorithm

Google Play Music is the lesser-known quantity in streaming music. It exists as a robust free service and a monthly subscription service with a broader feature set.

Google Play Music offers a broadly similar music library when compared with Apple Music and Spotify, but it’s missing some of those services’ better features. For example, Google Play Music lacks the ability to effectively build automated playlists in the way that Spotify and Apple Music do. It can suggest similar artists based on your listening, but that’s all. It’s the kind of feature that users from other services might be accustomed to. Its absence feels like a notable deficit.

However, Google Play Music does offer a collection of excellent activity-themed playlists. This comes from their acquisition of Songza, which collected playlists based on what you were doing while listening. With a superior mobile app, Siri integration and a broad library, Apple Music is the best streaming music service for Apple users to date.

Apple Music is basically a slimmer version of Spotify with some Apple-user hooks that you’ll like.

Apple Music might be Spotify’s most significant competitor at the moment. With a similarly-sized library, Apple is left to compete on secondary features. Even with the bloated mess that is the current desktop version of iTunes, Apple Music’s user interface is broadly better than Spotify’s current offerings. This is especially true when comparing the speed, fluidity, responsiveness and functionality of the service’s comparable applications.

The feature sets between the apps are very similar, with playlists, social sharing and the ability to save and follow artist. Purchased music from your iTunes library is folded effortlessly into the app, which is great for folks with big collections. A nice bonus to the automated radio is Beats 1, a radio station mixed by a live DJ. It’s youth-oriented but reliably listenable.

Apple Music also integrates with Apple’s devices at a deep level. It’s the only application that offers Siri support: you can ask Siri to play the Beastie Boys, and it will pop right up. This is what makes Apple Music the best music streaming service for Apple users. Users of other platforms don’t get this benefit at all, and it’s Apple Music’s biggest selling point at the moment. Sure, Siri is lame and sure, it’s an artificial distinction enforced by Apple’s singleminded desire to sell more hardware with apples on it, but the first time you put on music while you’re in the shower just by shouting into the void, you’ll be pleased.

Apple Music is the best streaming service for Apple users, even if its best features are restricted to iPhone, iPad and Mac owners. With enough time and attention from Google, Google Play Music will reliably grow into a serious competitor in the marketplace, but the feature set still needs to be expanded. For everyone else, Spotify is the best choice at the moment.

The Best Programs For Making Music On A Mac

How Apple Music Plans to Win the Streaming War