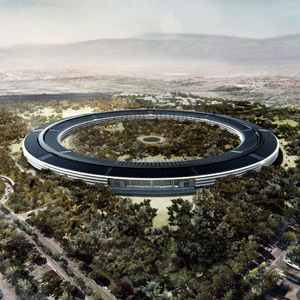 You know it looks cool, and you know it’s going to be crazy expensive to build. But here are 5 facts about Apple’s enormous new “mothership” Campus that will blow your mind.

1. Stand it up like a wheel, and it would be the 8th tallest building in the world.

It’s hard to get a sense of the size of a round, wheel-shaped building. Our brains just aren’t made to process its size the way we can a rectangular skyscraper. But imagine if you could tilt Apple Campus 2 by ninety degrees, so that it looks like the world’s biggest bicycle wheel. If that were possible, AC2 would be taller than the Willis Tower. Subtract its super-tall antenna, and even One World Trade Center would be shorter.

2. The wheel’s center is big enough to hold the largest stadium in America. The Michigan Stadium is capable of holding over 110,000 screaming football fans, making it the biggest stadium in the United States. The outdoor center of Apple Campus 2 is big enough to hold the whole thing with room to breathe.

You know the Aldar HQ in Abu Dhabi — the world’s first circular skyscraper? Laid over on its side, you could get at least 6 of those inside the center ring. The space is also big enough to hold about 4 Roman Colosseums.

3. You could run a mile by circling it.

The giant wheel’s outer circumference is about 4,776 feet — a few hundred feet shy of a mile. Run out a good ten or twenty feet from the side of the building, and you’ve got yourself a mile-long run. Inside, it will hold more than the famous New York City landmark. Even though it only has 4 floors (its 2 levels of underground parking don’t count), its footprint is so huge, it will be one of the largest buildings in the United States, with a gross floor area of 2,820,000 square feet. Pretty sure that’ll make it the biggest circle-shaped building in the world.

5. It’s got more curved glass than anything, ever. (Probably.)

If my calculations are correct (don’t look at me like that — I took 4 years of Drafting!), Apple Campus 2 will have over 332,000 square feet of glass covering the outside walls. And remember, that’s not just the outer walls that the general public will be able to see, that includes the inner circle walls as well, that open to the outside area in the middle of the wheel.

And we’re not talking about just any old glass here. This is custom-made curved glass, made in enormous pieces, which is notoriously hard to create. You know Apple’s 5th Avenue glass cube store in New York? With all the glass that AC2 will use, they could make about 70 of those cubes.