You are here: Home / Apple Culture / The Best Books About Apple 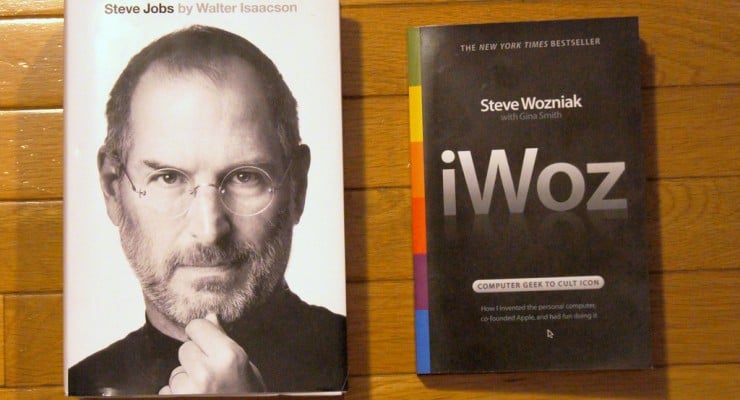 Apple is one of the most famous companies in the entire world. So it comes as no surprise that a lot of people are interested to know more about Apple and how it came to be. This company is essentially one of the building blocks that shaped the tech industry of today. There are several books that have been written about not just Apple but also of its founders.

Now that people are staying in quarantine, there’s no better time to read about Apple and its history than today. Here are some of the best books that you can read about Apple, Steve Jobs, and key people that built the company to what it is today.

The Best Books About Apple to Read This Quarantine and Beyond

First and foremost, the number one book that should be at the top of your reading list is this one. Steve Jobs by Walter Isaacson serves as the official biography of one of the co-founders of Apple. His name is basically synonymous with the brand itself. This book is a New York Times Bestseller, which bodes well for excited and curious readers. Unfortunately, Jobs wasn’t able to read the final manuscript of this book prior to his death in 2011.

Nonetheless, the book is known to be unbiased and shows a glimpse of the real Steve Jobs and his work ethics while he was still alive. Isaacson made sure of this by conducting over 40 interviews with Jobs himself. As the exclusive official biographer of Jobs, Isaacson also interviewed over 100 of his friends, colleagues, and even competitors. This book is guaranteed to give you raw details about the life and work of Steve Jobs.

Inside Apple by Adam Lashinsky

Inside Apple gives you a gritty look at what’s really going on inside that company. There’s some crazy stuff that went on in that Silicon Valley building and Lashinsky laid out all the dirty laundry in this book. According to this book, the company issues a “Top 100” list of new employees that are tapped for a semi-secret retreat with the CEO, which may have already changed today. The book also details a number of odd but effective ways of getting things done inside the company. The book also came out after Jobs’ death so it gives you a great glimpse of what it used to be inside Apple and compare it now that the company has been running without Jobs for years.

As the title suggests, this book by Ken Segall illustrates how the theme of simplicity is applied in Apple. If you’re an Apple user, you can actually notice this kind of theme in the design of Apple products. This book walks you through the great minds of the people behind Apple and how they thought of certain features in their products. Segall’s book is a good source of how marketing worked for Apple, as he served as the creative director of its ad agency particularly for the iMac launch and the Think Different Campaign. If you’re an entrepreneur inspired by Apple, this book would certainly be a great read.

Steve Jobs wasn’t the only person who founded Apple. Albeit lowkey, Steve Wozniak was the other founder of Apple. Our lovable Woz. Published in 2006, this book details the life and work of Wozniak in Apple. It’s an easy read that also provides details about his childhood and how he and Jobs met and worked together. However, the book doesn’t carry current events inside Apple, as Wozniak was known to have left the company pretty early. Nonetheless, this book is a light read for people curious about how the idea of Apple was conceptualized.

Apple Confidential is kind of the same thing as “Inside Apple”, you’re going to get a lot of the gritty details in this book. This text takes a close look at the early days of the company and the blunders that they went through when they were getting off the ground. 2.0 is the second version of the book and discusses more current issues with the company like lawsuits and internal struggles.

If you’re more curious about Steve Jobs as a person than as the brain of Apple, this book by his first daughter Lisa Brennan-Jobs is a good option to read. As the daughter of Jobs, Lisa gives a glimpse of his personality not just in the workplace but outside as well. Jobs initially denied paternity and some issues arose through the years before it was finalized that she was indeed his daughter.

The Bite in the Apple: A Memoir of My Life with Steve Jobs by Chrisann Brennan

Aside from Lisa, another person who used to be close to Steve Jobs was her mother, Chrisann Brennan. This book focuses more on the different aspects of her relationship with Jobs even before Apple was idealized. Contrary to other books lauding Jobs’ success, this book shows another side of Jobs that only Chrisann was able to witness. While it isn’t praising Jobs left and right, this book provides a great insight into Jobs’ personality during the formative years of Apple.

Revolution in the Valley: The Insanely Great Story of How the Mac Was Made by Andy Hertzfeld

Deviating from the personal life of Steve Jobs, a great book that focuses more on the products of Apple is this one by Andy Hertzfeld. Written by one of the original members of the team that developed Macintosh, this book details the development story of Macintosh. If you’re curious about how the Macintosh was conceptualized up to its launch in 1984, this book is for you.

Tim Cook: The Genius Who Took Apple to the Next Level by Leander Kahney

There were also key people other than Steve Jobs who helped shaped Apple to what it is today. One of these key persons is Tim Cook, the current CEO of Apple following Job’s death in 2011. This book serves as the biography of Cook that details his achievements even before taking the helm at Apple. It also details his accomplishments since taking over the company and how he handled certain crises while on the job.

Another key person that helped build Apple to what it is today is Jony Ive. He served as the Chief Design Officer of Apple until 2019. This book serves as his biography that details his life and contributions to Apple as its lead designer. His vital role in the company helped in growing Apple, its products, and ultimately, its consumers.

The Second Coming of Steve Jobs by Alan Deutschman

Going back to Steve Jobs, this book by Alam Deutschman provides a glimpse of the events that occurred following Jobs’ comeback after being ousted from Apple. Having originally founded Apple, this text details the struggles that Jobs experienced when he was kicked out of his own company. Published in 2001, it gives an interesting insight into how Jobs transformed Apple into becoming one of the best companies in the world when he returned to the company.

While Apple looks so simple on the outside, there were a lot of factors that helped build the company to what it is now. From these books, you’ll learn just how much time, effort, and genius thinking it took to create Apple and its multiple products. Its contribution to the tech industry is unparalleled and these books will give you a glimpse of how they grew to be the Apple we know today.

40 Years Of Apple – Our Favorite Highlights