You are here: Home / Apple Culture / 5 Facts About Jony Ive You Might Not Know 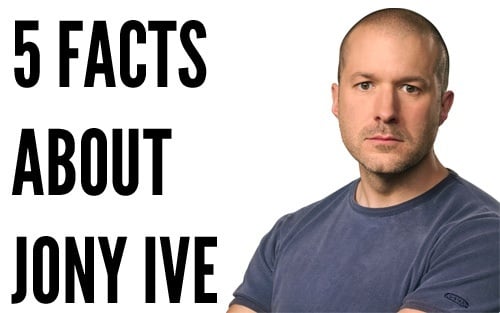 Even though Tim Cook is the CEO of Apple, Sir Jonathan Ive has become the face of the company in much the same way that Steve Jobs was. Ive has in some way touched every current product from Apple, and with a never-ending dedication to true design and functionality, he has become the heart of Apple and it’s hard to imagine the company without him.  Your probably know all this, though, so here are five facts about Jony Ive you probably didn’t know.

Back in 1985 Apple’s board voted Steve Jobs out of his position due to Jobs’ “difficult” personality in the early days of Apple. In 1997 however, Jobs returned to Apple to help with the rise of Windows 95.

It was then in ’97 that Ive thought it was in his best interest to find work elsewhere until his then-boss Jon Rubenstein convinced him to stay with a killer pep talk and a decent raise. With the raise came the title of Senior Vice President of Industrial Design.

2. Ive’s First Product Was a Toilet

Before Jony Ive worked for Apple he joined a London design firm called Tangerine. His first job at this startup was to design the best bidet, toilet, and sink for a client. The trio was ultimately rejected due to high production costs.

3. An Early Christmas Gift Was Working With His Father

Jony Ive’s father was a very talented silversmith who also taught at a local college. His father would give Jony the gift of having an entire day in the shop when no one else was there to make whatever he could imagine.

His father, Mike Ive, even helped design mandatory curriculum for British schools to help foster designers. Jony credits his father with instilling the designer ideology in him at an early age and helping to foster it throughout his life.

While this is a pretty huge understatement, Ive currently has 596 design and utility patents in which he is listed as the inventor. That’s a pretty huge roster of inventions for anyone, especially someone so involved with running design at a company as large as Apple.

5. He Doesn’t Want A Promotion

There’s been talk recently about the job that Tim Cook has been doing at Apple. With stock prices fluctuation there’s always talk about a replacement, even if it’s in a few years. All signs point to Ive as the next head of Apple but it looks like he doesn’t want it.

Ive is all about design and making design better. He’s been quoted as saying he doesn’t want to deal with the problems of running a company, and if the iPhone 5 and iOS 7 have anything to say about it, he should probably stay right where he is and keep making the amazing products he’s known for.

Ive was quoted in 2012 as saying that Apple isn’t there to make money, but rather to make great products. If they’re successful at that, the money will come. That makes it pretty obvious where he feels he can do the most good, and that’s not as CEO.

Apple is known for its secrecy and Jony Ive couldn’t agree more. His secrecy is only trumped by that of the late CEO, but that doesn’t stop him from creating amazing products. This enigmatic member of Apple’s leadership, who is never seen at Apple press events other than on a television screen likes what he is doing and few would say he’s not one of the best product designers alive today.