You are here: Home / AirTag / Apple AirTags vs Tile: Which Should You Buy? 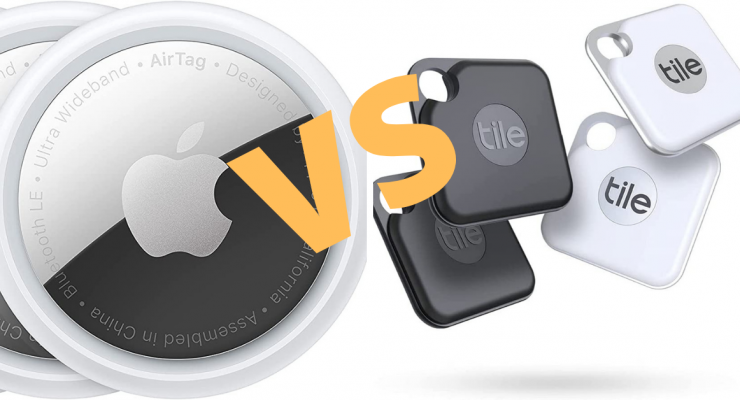 Gone were the days when once you’ve lost your wallet or your bag, it’s gone for good. Thanks to the invention of location trackers, you can find almost anything easily through your smartphone. This includes your bag, your wallet, your keys, your TV remote, and even your pet! The top two contenders for the best location trackers right now are the Apple AirTag and Tile. Between the two, which one should you buy?

Which one has a better design and longer battery life?

The Apple AirTag has a tiny, circular design that can easily be slipped inside your pocket or your bag. It has a stainless steel face that features the Apple logo and a plastic back. Unfortunately, it doesn’t come with any holes so you can’t just insert or attach a simple keyring onto it. Instead, you have to use a separate keychain with a holder to use this tracker for your keys.

Built inside the AirTag is a speaker that can produce a sound when triggered through the Find My app. Unfortunately, this isn’t compatible with Android phones, which isn’t exactly surprising. According to Apple, the AirTag’s battery can last for more than a year before it will need a replacement. In addition, the AirTag is also designed to be waterproof with an IP67 rating. This means that it can be submerged in water at a depth of 1 meter for no more than 30 minutes.

On the other hand, Tile offers four different kinds of location trackers designed for specific usages: Tile Sticker, Tile Slim, Tile Mate, and Tile Pro. They’re all made of plastic and, just like the AirTag, also come with built-in speakers for the same purpose. You’d be pleased to know that with Tile, its trackers are compatible with both Android and Apple phones.

Just as the name implies, Tile Sticker comes with a sticky pad on its back. It’s a bit smaller compared to AirTag and can be easily used to attach to items like remote controls. On the other hand, Tile Slim is meant to be used in wallets and bags. Hence, it has almost the same size as an ID or credit card.

According to Tile, both trackers’ batteries can last up to three years. However, these batteries are not replaceable. This means that after three years or so, you’ll have to buy a new location tracker again. While they are also waterproof, the company did not specify the IP rating for these.

Tile Mate and Tile Pro both have the same square design, but what makes them different (or better?) is that they have built-in loops. Because of this, you no longer need to purchase a separate keyfob to attach it to your keys, unlike the AirTag. Their batteries can also last up to a year and are replaceable.

The only difference between the two types is that the Pro has a wider range than the Mate. The former is also slightly thinner than the latter. While they are both water-resistant, they’re not waterproof.

Which one is more affordable?

The Apple AirTag costs $29 each while a pack of four costs $99. Do note that you might still have to purchase a separate keyfob if you want to attach this location tracker to your keys or a separate holder for your pet’s leash.

On the other hand, each of Tile’s location tracker types costs differently. In terms of closest in price, we’d have to compare the AirTag to Tile Mate. It retails for $24.99 and can already be attached to your keys without having to purchase a separate keyfob. For a pack of four, Tile Mate costs $69.99. Between the two, Tile Mate is obviously more affordable.

What makes it even better is the fact that these trackers from Tile also typically go on sale during special occasions like Black Friday and Amazon Prime Day. They can go as low as $14.99 while Apple doesn’t normally offer discounts on accessories like that.

Which one has a better sound?

Both the Apple AirTag and Tile location trackers can emit sounds to let you know where your missing item is. Both also feature voice assistant integration so your voice can already trigger these devices. However, the AirTag is compatible only with Siri while the Tile trackers are compatible with Siri, Alexa, and Google Assistant.

The sound that both devices make ranges from 60 to 70 decibels. This ensures that you will still be able to hear them even if they’re buried under a pile of cushions. The difference between the two, however, is that the AirTag doesn’t sound continuously unlike the Tile trackers.

The Tile trackers will continuously produce a sound until you purposely press stop on the app. In addition, users get to choose from 10 different electronic sounds. On the other hand, the AirTag will only produce three cycles of the same sound whenever you press Play Sound from the app. There’s also only one option for electronic sound.

How do these tell users where the lost item is?

The Apple AirTag features Precision Finding, which shows users their distance from the AirTag. The Find My app will also display the direction to where the AirTag is located. This is more useful compared to Tile, which only shows concentric circles that light up the closer you get to the location tracker. You’ll also get a signal rating to let you know how close you are to the tracker.

Privacy has always been an important aspect that Apple focuses on when designing its devices. With the AirTag, Apple has taken multiple privacy measures to ensure that the AirTag won’t be utilized to invade other people’s privacy. For one, it can help you get notified if there’s an unknown AirTag constantly within your premises or traveling with you.

In addition, an AirTag can only be activated by its owner and nobody else. If somebody steals your item and keeps moving away from you, it can automatically play a sound to alert its owner.

Which is the best location tracker?

Both the Apple AirTag and Tile trackers are great location trackers. Either one can effectively help you keep your items from getting misplaced. However, each one has its pros and cons. Ultimately, it’s up to how you would want to use these location trackers.

Both devices also feature a Lost Mode so that if other people find your item, they can efficiently let you know and return it to you. If you are on a budget and want something more affordable, Tile would be the best choice. However, if you want something that looks stylish and also offers more privacy features, the Apple AirTag is the one to beat.