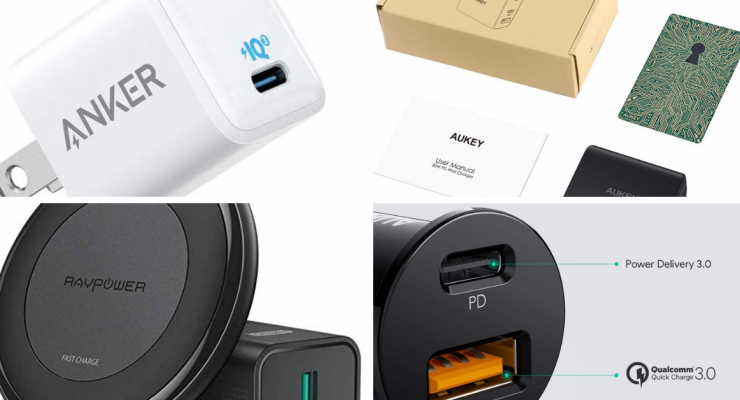 Apple recently launched its latest iPhone model: the iPhone 12. While Apple fans were ecstatic and excited to see the new release, a lot of them were bummed by this one caveat: the box no longer included an iPhone charger. The box still includes a USB-C-to Lightning cable but it doesn’t have a power adapter nor a pair of earphones anymore. Now, people who wish to purchase any of the iPhone 12 models must buy a separate power adapter if they don’t have one yet. Here are some great iPhone 12 chargers that you can get for under $20. If you’re looking for something compact and portable, a good option would be the Aukey Minima 18W PD Charger. It’s a single-port fast charger that would juice up your iPhone 12’s battery in no time. One of its nice features is its foldable plugs. It comes in black and white, which are simple and minimalist. It also has a 20-watt version if you want something that’ll charge a bit faster. On the other hand, if you’re looking for a dual-port charger, you can opt to get the Aukey Focus 30W dual-port USB-C charger with a USB-A output as well. This 30-watt charger can charge both an iPhone and an iPad simultaneously. It can even charge a smaller MacBook if you’re using the USB-C alone. Otherwise, the output for USB-C would be 18 watts and 12 watts for USB-A if both ports are used at the same time. Another dual-port charger worth looking into is the RAVPower 30W 2-Port USB-C Fast Charger. Similar to the Aukey Focus charger, this one can also provide 30 watts of output when the USB-C is used alone. When both outputs are used at the same time, 18 watts would go to the USB-C output and 12 watts would go to the USB-A output. It’s also quite affordable considering how much power it can provide to your devices in such a short time. Looking for a car charger, too? If so, take a look at the Aukey USB-C 21W Car Charger with Power Delivery 3.0. It’s a portable charger that can juice up your iPhone’s battery fast. This car charger is also designed to sit flush with the port of your car so it doesn’t catch that much attention. It’s also dual-port so you can opt to charge your iPhone 12 using a USB-C or a USB-A port. Tired of wires? Then you can just get the RAVPower Fast Wireless Charger. This one comes with a power adapter that enables it to provide 10 watts of output to your iPhone 12. It’s already quite fast considering the fact that it’s inexpensive compared to other wireless chargers of the same capacity. It retails for slightly higher than $20 but there’s an ongoing coupon that would bring the price down to just around $20.

Aukey is continuously proving to be such an amazing brand in this industry. Another charger worth checking out for your iPhone 12 is the Aukey Omnia Mini 20W Power Adapter. This one is such a small charger that you can basically bring it with you wherever you go. Despite its tiny size, this charger can pack up a lot of power. Getting 20 watts from such a small charger is incredible! Charging your iPhone 12 with this device will be fast and breezy. It’s also designed to protect against overcharging and overvoltage. This charger also features advanced temperature control so it won’t heat up quickly. Another 20W charger you should look into is the Anker Nano iPhone Charger. This one is quite popular among tech YouTubers today. What sets this charger apart from the rest is its technology. It utilizes gallium nitride or GaN instead of the usual silicon that other chargers are designed with. As a result, this charger is much smaller compared to other chargers of the same output. It also won’t get hot easily thanks to these electrical components. It’s a single-port charger that also comes with a USB-C-to-Lightning cable so you’re all set to charge your iPhone 12.

If you want to use only Apple products through and through, you can just purchase Apple’s new USB-C 20W fast charger. The old version of this could only provide an output of 18 watts and came at a more expensive price. This new version is not only faster but also more affordable. It can charge up your iPhone 12 from 0 to 50% in just 30 minutes. Not bad, eh? Definitely something worth checking out if you’re on the lookout for a good iPhone 12 charger.